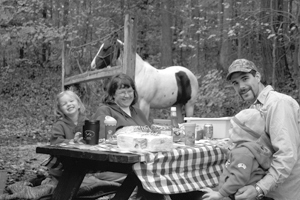 The new 2,000-acre state park in Harrison County was created out of the former Wyandotte Woods State Recreation Area. The park contains more than 100 miles of recreational trails and is surrounded by the 24,000-acre Harrison-Crawford State Forest, 1/2 hour west of Louisville.

“So many of us who knew Frank O’Bannon know that the commitment he and Judy shared for Indiana is one that has been passed down for generations,” said Gov. Joe Kernan today in his announcement of the creation of the state’s 24th park.

“More than 20 years ago, Frank O’Bannon, as a state senator, proposed legislation to change the recreation area to a state park, believing it could better serve Hoosiers. Today we take that step and add to our state park system an area that will continue to be vital to Indiana’s growth.”

Kernan also pointed out that Frank O’Bannon’s grandfather, Lew, served as a member of the Historical Commission for Indiana’s Centennial. In 1916, the commission recommended the creation of a state park system as a birthday present for the citizens of Indiana. That year the state purchased McCormick’s Creek and Turkey Run State Parks.

Harrison-Crawford State Forest, created in 1932, grew to become one of the state’s largest properties. Like Indiana’s 12 other state forests, it is managed for a variety of uses including hiking, hunting, camping, horseback riding, wildlife watching and forest products.

O’Bannon Woods S.P. already boasts a modern 281-site campground, a horserider’s campground, an interpretive center, Wyandotte Caves, a pioneer village, a 19th Century working hay press and hiking and horse trails that lead into the state forest. The Blue River, a favorite among canoeists and anglers, flows through the new state park.

A park master plan calls for development of a new aquatic facility, expansion of the horse campground and a possible state park lodge and cabins.

“All three generations of the O’Bannons whom I’ve known have very much appreciated these woods and felt they were important to the area and the state,” said Mrs. O’Bannon.

“Years ago, Frank’s dad helped plant trees here and on my first trip to Corydon, before we were married, the state forest was one stop on the tour of sites that Frank felt I had to see. It’s wonderful to know that this land will continue to be here as a state park for Hoosiers to enjoy for generations to come,” she added. “Frank loved to sit quietly in the woods and watch nature put on its show.”

Get Involved in Watershed Vision by Jane Loomis, Executive Director

During summer flooding in 2003, the eyes of northeastern Indiana turned to the St. Mary’s River, which threatened homes, parks and other facilities all along its route through two Indiana counties. Flooding is a water quantity issue, and an important one.

Beginning this fall, the eyes of the state will focus on the St. Mary’s River from a water quality perspective as the Indiana Department of Environmental Management begins work on a plan to reduce a number of identified pollutants in the St. Mary’s River and its tributaries. IDEM will be seeking stakeholder input to a Total Maximum Daily Load (TMDL) allocation that will identify sources of pollution and methods to reduce pollution loads. As a part of that regulatory process it is vital that the community get involved in developing a vision for the St. Mary’s River.

Even with the best of intentions, the finest leadership and plenty of funding, watershed protection plans created by government agencies cannot reflect the needs of the community unless stakeholders get involved. All stakeholders. That means community groups, moms, dads, kids, farmers, city dwellers, sports and outdoor enthusiasts, educational institutions, businesses and corporations, land and housing developers, and governments – in short, everyone who has a stake in the land and water of the community.

As a community we must set the priorities for our watershed both as part of the TMDL process and outside that process.

Some steps to take:

Proactively come together and delineate community goals for the watershed.

Make those goals known to local and state government agencies.

Keep track of new laws and regulations and be aware of how the community’s goals for the watershed might be affected.

In short, be the eyes, ears and especially the voice of the community. In total, it’s politics. Community relations, family relationships, neighborhood relations – politics. Not a dirty word, but a call to be actively engaged in your own neighborhood or local community.

Share your vision. Determine your goals. Leaders will emerge, spokespersons will be identified. Directors can be hired eventually. The biggest requirement is that you, as a community member, not ignore the issue nor turn your back and say, “someone else can do it.” It’s too important to the life of your community.

Step up to those challenges – go back to your own family, business, community group or agency and urge community action. By building relationships and becoming a community connector, you can help to create the big picture – the vision — for the St. Mary’s River. From there, you can make the decisions to protect clean water and productive land far into the future.