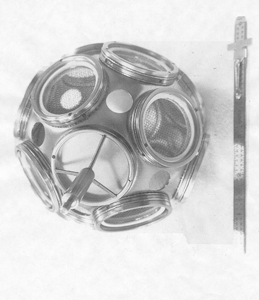 Prior to Farnsworth’s methodology of “electronic fusion” only two methods of achieving a fusion reaction was possible, the first consisted of mating canisters of hydrogen fuel to a fission bomb and exploding it. After the bomb exploded the plasma from the explosion engulfed the hydrogen fuel and the intense heat (high energy) inside the plasma was sufficient to cause the hydrogen nuclei to combine. This fission methodology is aka (also-known-as), a “neutron bomb.” The second method of achieving a fusion reaction was a method called magnetic containment and Farnsworth predicted magnetic containment devices would not work because the energy input would forever exceed the energy output. However, after the young PhD left Farnsworth’s project and moved to a new job with the AEC (now the Nuclear Regulatory Commission) he bought TOKAMAC from the Russians and it was a magnetic containment device? Both men cannot be right! Farnsworth’s long track record of success with television, and about 200 other patented technologies compared to a young PhD with no meaningful patents to his credit, makes him (Farnsworth) an odds-on favorite of being correct!

I found many things in this story that didn’t add up, for instance why is there no mention of this historical fusion event in the Fort Wayne Quest Club’s history book, the Fort Wayne Allen County Library, or at the new Farnsworth museum in Auburn, Indiana? But, the really big question is, “Why did ITT pull the plug on the most promising fusion experiment ever conducted?” After more than a decade and countless hours of taped interviews, snail mail and email exchanges with nuclear physicists, engineers and astronomers, I cannot answer that question. I know Farnsworth’s fusion technology was and is a direct threat to the energy baron’s profits and the way our world’s wealth is divided and with gas prices headed for three dollars a gallon the stakes today are multiples higher than in the 1960’s. Cheap, clean limitless electrical energy by fusion is also a threat to combustion engines and their component industries, fission powered and fossil fueled power plants, several government regulatory commissions and billions in research grants for several of America’s largest universities.

During the past 39 years hundreds of billions of dollars has and is currently being squandered on magnetic containment research, but not one dime has been granted to anybody attempting to do further research on Farnsworth’s method of electro-static-inertial containment method. The Farnsworth experiment’s early demise certainly looks, smells and walks like a conspiracy, but I’m more inclined to believe it was the result of a phone conversation between Albert Einstein and P.T. Farnsworth. Einstein said, “After the second atomic bomb was dropped on Japan and I saw what my work had been used for, I vowed to never contribute further.” I have come to believe that after Farnsworth realized ITT’s board of directors sabotaged his fusion experiment by turning it over to their young PhD, he (Farnsworth) vowed, “never to contribute further!”

The History Channel is currently running a program about fusion and a magnetic containment device they’re hyping that’s big enough for a man to crawl inside and stand up and they claim the best they’ve ever achieved in high energy was about 200 million degrees F. Pictured in today’s side bar is the shell of a Farnsworth fusion device that had an estimated core temperature of more than 330 million degrees Kelvin. Please note the six-inch scale beneath the picture.