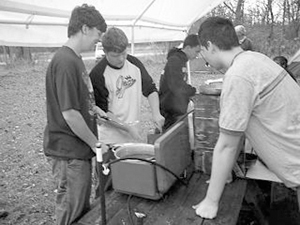 ‑ Boy Scout Troop #344, chartered through Waynedale United Methodist Church, got to sample a little bit of about every kind of weather that Indiana could offer‑during‑the last weekend in October‑for their last camp out.

Troop #344 arrived at the Ouibache Park outside of Bluffton after dark on Friday evening. With that Boy Scout luck still holding for us, we managed to get the tents and dining fly up in the winds that preceded our‑Friday night rains.

The Scouts and Leaders were quite glad that things worked out that way. The Scouts had a‑campfire going and ducked under the dining fly to play cards by lantern light as they enjoyed chips and dips and fellowship before they unrolled their sleeping bags for Friday night.

During the night Friday the wind picked up and the rains came. The temperatures were at that point where you really appreciate a warm sleeping bag. Fortunately the rain was a mere nuisance and it had even subsided before breakfast on Saturday morning. Just a pleasant shower to‑go to sleep by.‑The same cannot be said of the winds though. It was quite a test for the new tents that the Waynedale Lions Club helped the Unit procure. Those winds also heartily validated Scoutmaster Bob Rainwaters choice of equipment. It was even somewhat amusing to watch a new tent catch a gust of wind and attempt to go airborne; only to flatten out entirely in the grass before the shock-corded poles did their job and popped the tent back to a standing posture. Then the process repeated itself. Again and again.

Before noon our guests had arrived. Cub Scouts and Leaders from Cub Scout Pack #3352, from Pleasant Center Elementary School, showed up for a day trip and for a taste of the next phase of the Scouting program that they will be entering soon. After a quick lunch of chilidogs and snacks the combined group took off on a 3.5-mile hike through the park. As the group hiked they also picked up and bagged much trash that less considerate individuals had left just lying throughout the park. As good Scouts, Pack #3352 understands and follows our‑ “leave no trace” philosophy. Take only pictures and leave only footprints sums that one up. The Scouts were also able to observe autumn wildlife and hearty fall plants during their‑hike.

That walk was long enough for the entire group to arrive back at camp packing an appetite with them. Eagle Scout Candidate Kyle Rainwaters demonstrated that with a little practice a lot can be done over a campfire and with a dutch oven. Kyle’s signature pile of Jambalaya, with lots of shrimp and sausage, vanished in a hurry and helped refuel the entire groups supply that had been depleted by the hike.

Those pesky winds (gusting to 51MPH) did help dry everything out though. So with clear skies and lots of sun (and even those winds) it was a beautiful fall day at the park and for camping.