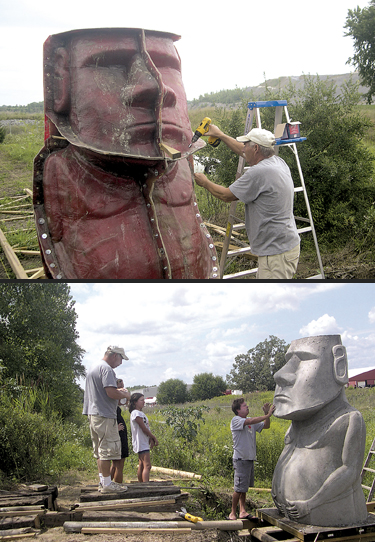 On Tuesday, September 29, 2011 a local writer who reflects on others’ experiences, Frank Gray from the Journal Gazette in the Metro section, wrote an article titled, Sculpture a genuine head scratcher.

“But the piece is a mystery,” he wrote.

Mr. Gray was correct when he wrote about the fact that the statue resembled those found on Easter Island.

This is the story that completes the mystery of the Moai statue found on Lower Huntington Road in Waynedale.

The journey really started back in the early 1980s. My wife Mary and I were living in Rock Springs, Wyoming. She was teaching elementary school and I was an engineer at the Jim Bridger Power Plant. Mary wanted to take a class at Western Wyoming College in geology and I was interested in anthropology. The same professor, Charlie Love, taught both classes.

Charlie is a second-generation geologist and also has a masters in anthropology. His father was a geologist who had, among other things, mapped the geology of Yellowstone National Park.

We found Charlie to be a wealth of information, drawing on an unlimited supply of stories of cultures from all over the world. One of his favorite topics was Easter Island.

Charlie had been working on a book about Easter Island and he was especially interested in how the statues (Moai) of Easter Island were transported from their volcanic stone quarry to locations at various parts of the island. He posed the riddle of moving the statues to me and together we came up with a working model of how the Moai may have been transported.

Before we could complete the engineering work, Mary and I moved back to Fort Wayne. My brother and I started an oil analysis laboratory, Blackstone Labs, and Mary went to work as an elementary school teacher for the Fort Wayne/South Bend Diocese.

We continued to stay in touch with Charlie and he continued his research on Easter Island statue moving. He completed his first replica statue and proceeded to move it on December 16, 1987. The project was covered by the BBC, Nova and the local newspaper, The Daily Rocket-Miner.

I wish I could have been there but work and life kept me busy. I left Blackstone Labs in 1999 and purchased The Waynedale News in 2000. I retired from the newspaper in 2009 and started working on unfinished projects. I wanted to complete my work on Easter Island Moai moving, so I joined a woodworking group in Huntertown and built myself a 1/5 scale model of a Moai and the apparatus to move it.

I got back in touch with Charlie on October 10, 2010 and found that he had made a fiberglass mold of a Moai. During our communications I asked him if I could borrow his mold and experiment with moving the replica statue. Charlie agreed.

Charlie had put four to five thousand dollars and a year’s time into the mold project and I was anxious to get it to Fort Wayne to create my own replica Moai and do some experimenting.

My friend, Boyd Tarney, agreed to assist me in traveling west and on March 4, 2011 we left Fort Wayne and headed for Rock Springs, Wyoming. We traveled through Illinois, Iowa, and Nebraska and made Wyoming on March 11. We were interested in doing a little exploring along the way so we hiked the Sweetwater River along the Gold Rush Trail up around Jeffrey City, Wyoming. We stayed in Rawlins the night of the 11th and we were in Lander, Wyoming on the 12th. We climbed Boars Tusk, an extinct volcanic neck and then headed for Rock Springs.

We hooked up with Charlie on the 13th of March and it was great seeing him again. He is the Wyoming version of Indiana Jones. He has been on adventures in Africa and South America and has studied extensively throughout the western states. His home is full of statues, carvings, paintings and memorabilia from all over the world.

We picked up the statue mold on the 15th and headed home via I-80 staying in Cheyenne. The weather had been perfect up to that point but a spring storm brought a couple feet of snow to parts of Nebraska and the highway department closed I-80. We spent a second night in Cheyenne and then continued our journey home on the 16th. The round trip cost about $1100 in gas. The motels were about $60 per night.

We took the fiberglass mold over to Key Concretes’ lay-down yard as we needed a place to store it and I continued to formulate a plan for pouring and moving an eight and a half ton, nine and a half foot Moai.

I quickly realized that I couldn’t do the pouring and moving by myself. Just as I had needed Boyd, I was now in need of favors from friends and family to complete the project. And there was no assurance that the project would work.
This is the point when the door to the anxiety closet swings open and all the fears and doubts of a project come rolling out. Will my ideas work? If I fail, can I stand the ridicule?