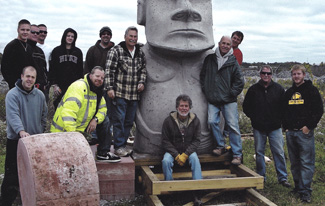 This is the fifth of five parts to the story that completes the mystery of the Moai statue found on Lower Huntington Road in Waynedale.

I decided Saturday, October 1, would be a good day for moving so I set the moving time at 10 AM and started making phone calls. I wanted to involve everyone in the move that had helped so far with the project.

Saturday dawned cool and windy. People started showing up about 9:30 AM. Rob brought along some chain that could be slung behind the base of the Moai and added some nylon hand-holds.

Everything went well. In fact, the 14,000 pounds rolled much better than I had thought it would. We went 100 feet in 45 minutes with 15 people. We could have gone a lot faster but it was our first trial.

During the move, people did whatever was needed. As the statue moved forward, the rollers were moved up one-by-one and as the trolley cleared a set of lower rails those rails were advance forward. Rob accidentally hit my great nephew CJ in the head with a roller. It created about an inch-and-a-half cut on the top of his head and that was all for CJ. There were no stitches needed. Brother Dan was also hit with a lower rail, which creased his sideburn, but minimal damage was incurred.

All the preparation and work and then, it was over in forty-five minutes. The people who had come late had missed it. The crew was ready to do more, but that was all I had planned. My nephew Dan suggested that we move the hat next to the pedestal so with levers and brute strength four of the team turned the 3000 pound hat on its side and rolled it like a big snowball near the statue.
It was a huge relief, seeing it all come together. I still had the task of putting the statue on the pedestal and the hat on the statue but the system of locomotion had worked beautifully.

On October 11, 2011, I drove out to Antibus, Scales and Systems at 4809 Illinois Road. Their sales and marketing manager, John Wassell was good enough to look over my project and identify the type of scales I would need to generate the engineering data we were hoping for. John recommended a Dillon ED2000, which he said would give me a digital read-out of up to 2500 pounds, plus or minus two pounds. The next day, Wednesday, John called and told me he had located a scale I could borrow to do my testing. It was another of those instances in the project in which the right person had called at the right time to move the program forward.

Saturday, October 15, 2011 brother Dan met me at the Moai at 10:30 AM. We rigged two snatch straps, one end to the Moai and the other to his pickup truck and placed the Dillon scale between the puller and the pulled.

The statue had been sitting for three weeks and the rollers were not quite evenly situated which had created some indention in the upper and lower tracks. The scale was programmed to save the peak load incurred during the trial. It took 1035 pounds of pull to get the 14,000 pound Moai moving. We re-set everything and tried again. The next test required a mere 826 pounds of pull. My wife Mary stopped by and we continued the tests moving the statue from about one foot to four feet each test.

The end result or 9 trials gave us an average peak load of 1080 pounds per move. The variations in peak load were due to variations in terrain, misalignment of track and rollers and a slight upward slope (20 inches of rise over a distance of 100 feet).

As the Moai rolled, the scale would drop from an initial peak load to a rolling average load of a little over 660 pounds. (Calculated over three trials, watching the digital readout as the Moai moved forward).

As we continued our tests, a number of Waynedale residents stopped by to have a look. One, Darrell Adams, happened by just as the nine-volt battery in the scale gave out. Adams just happened to have one in his car and the tests continued.

Monday morning I gathered up the Dillon scale and returned it to John Wassell at Antibus. He had given me the equipment I needed to complete the testing phase of the project and the loan was much appreciated.

Saturday, October 22, 2011, my wife Mary invited some of the women from Curves to move the Moai. My son Rob showed up to run the project and brother Dan stopped by to help on the alignment. The 12 women started moving the Moai at 10:30 AM and had it back to its place (50 feet north) next to the pedestal by 11: 00 AM.

One of the women’s husbands, Tom West, also helped move the rollers forward. I later found out that Tom is from Hawaii. Hawaii was settled by the Polynesians, the same people that settled Easter Island around 400 AD and it is very likely it was his collateral ancestors that carved and moved the original Moai during the time span between 1000 to 1600 AD, so many years ago.

I was going to bring in a piece of heavy equipment (boom truck, crane or lull) to pedestal the Moai and sit the hat but my son Rob said we could do it by hand.

Rob, Ben (nephew) & I tried to move the Moai from the trolley to the pedestal Monday (11-7-2011). We put a come-a-long between the top of the Moai and Rob’s bumper hooks (F150 W 4-W drive). We tilted the Moai enough to get five broomstick rollers under it and then moved the pickup to the other side and tried to roll the Moai across to the pedestal. We couldn’t budge it. Tuesday, we got two more come-a-longs and two more guys, Jamie Shiftlet and Jamie McKnight. We synched everything back up and tried again. We blocked the tires with railroad ties and winched. The tires rose up over the ties and we had to let her down and dig out some depressions for the tires and re-block. This time we were able to move it inch-by-inch to the pedestal.  Now the only thing left is to put the 3K pound hat on. Rob thinks he can do it with the Bobcat. I hope it works.

Rob Stark came over to the project on Friday, 11-11-11. He brought his work Bobcat and slid the forks under the hat to see if he could lift it. The 3000 pound hat was no problem, so Rob switched from the forks to a scoop, built himself an earthen ramp to get up high, switched back to the forks and proceeded to lift the hat into place. He switched back to the scoop, removed the earthen ramp, loaded the Bobcat and that was it. Project complete.

Could the Rapanui people have built a movable rail system to move their statues to all parts of the island?

The answer is yes.