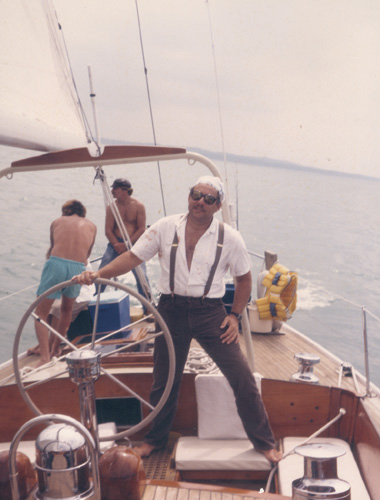 John grew up in Waynedale at the house across from the post office on Old Trail Road. The house is now a showplace compared to what it was in the fifties. He often joked that if there had been Code Enforcement back in those days the house on Old Trail would have been tagged as being ‘out of compliance’. The front porch banisters were often laying on the ground, falling victim to the five boys and two girls forever racing around the house, using the banisters as vaulting rails. There was not a blade of grass in the front yard and the windows were often in disrepair. In the fifties a polio epidemic was sweeping the nation. John contacted the dreaded disease and their home was put under quarantine. He survived polio and the disease left its mark, but still, it was an idyllic time of Father Knows Best, Dennis the Menace and the Superman TV series.

Then came the sixties, a time of rebellion. It was a time of drugs, sex and rock-n-roll. It may have been the time period or a genetic disposition or even an unbalance in his brain chemistry but John’s life took a turn that was less than saintly. He was caught up in the downward spiral of alcohol, and drug addiction. His chemical dependency drew him into the oft recognized pattern of dealing drugs and smuggling to support his bad habits.

John learned to sail and spent his time between Michigan and Miami. His addictions finally lead him to a place called “rock bottom”.

John said, “I was making a run from Miami to Michigan and I had made it to my place on Genessee in Waynedale. It had been several days since I had slept. My mind tricked me into believing that if I sniffed a few lines of cocaine I could make it to Michigan without sleeping. I fished out a large rock from one of the kilos and started snorting lines, one after the other, but I couldn’t get high. And then somehow I went from not getting high to an overdose situation. I lost all my color and turned an ashen grey, even the pink under my fingernails turned gray. A voice said, “You’ve finally killed yourself.” To this day I do not know from whence the voice came, but I clearly heard it. I started walking and walked west on Sandpoint until I came to a set of railroad tracks, where I turned south and walked the tracks. I walked over a railroad trestle where it crossed a creek, to a place I once played when I was a boy. I walked through Waynedale where I grew up and I walked on south to another railroad bridge and creek that was also a part of my childhood playground. I walked all night long. To this day I’m convinced that if I had gone to sleep I would have never again woken up…the endless sleep.”

John found his way to Alcoholics Anonymous and a transformation began. It happened one day at a time, with four different sponsors, countless meetings, working the steps, helping others and a relationship with a mysterious unseen power that had given him a new beginning.

John went on to sponsor many people that had fallen into the same trap of alcohol and drug addiction. The little house on Genessee became one of the meeting places for his Tuesday night meetings. He was also a writer for The Waynedale News.

After twenty-five years of sobriety, John passed away early Saturday morning, November 10, 2012. from sclerosis of the liver. His newly published book, The Little House on Genessee will serve as a legacy of hope and inspiration to those who find themselves in the downward spiral of alcohol and drug abuse. He will be missed by his family his friends and all those who have known him.

During August of 1985, John Stark was introduced to a retired newspaper man, the late Edward Kennedy, who heard his life story. Ed said, “Colleges crank out hoards of writers, but they don’t have a story. You have a story and should learn how to write—lest it will never be told!”

John enrolled in a basic typing class at the Old Central High Night School and was tutored by Mrs. Gloria Van Slyke who further encouraged him to continue writing. His third mentor was the late Betty Grotness who once worked for the Chicago Tribune. His fourth mentor, Rodney Miller, currently a resident of Shenyang, China. His fifth writing mentor, and current editor is Professor Glenn Chesnut who has authored several books.

Tales from the Caribbean, a regular column in The Waynedale News, was written by John. It was a bi-weekly fictional creation, that’s now ready for the printer in book form. Some of the characters are vaguely modeled after real characters he once sailed with, but the story line is strictly produced by his creative writing. “Tales” is his second effort at writing fiction and at creating fictional characters. Some of the folks in Waynedale and members of the Outlaws Soccer Team remember his first fictional characters–a bookie, the Sports Doctor, Mademoiselle and her Mama, Jacques Le Foot, Mahmud, Father Lambini and others.

After Robert Stark purchased The Waynedale News in 2000, he called his brothe r and asked him to write a column about alcoholism. John was skeptical that the column would even last a few months. Ten years later The Waynedale News changed ownership and “Here’s to Your Health” still remained one of the most popular columns. The writer, John Stark, of HTYH was an active member of Alcoholics Anonymous and therefore maintained anonymity at all levels of press, radio, and film. A friend of the columnist, named Bill Q., suggested the name of John Barleycorn be used to protect the writer’s anonymity–it’s the same name used in the book Alcoholics Anonymous for alcohol—it’s synonymous with not only bread, but alcohol…

Barley, encounters great suffering during grinding before succumbing to an unpleasant death by fire. However, as a result of his death, bread is produced; therefore, Barleycorn dies so that others may live. Finally his body will be eaten as bread, it returns to the earth, and once again, springs to life—he can never die…

John will be sorely missed by The Waynedale News as a writer and friend!