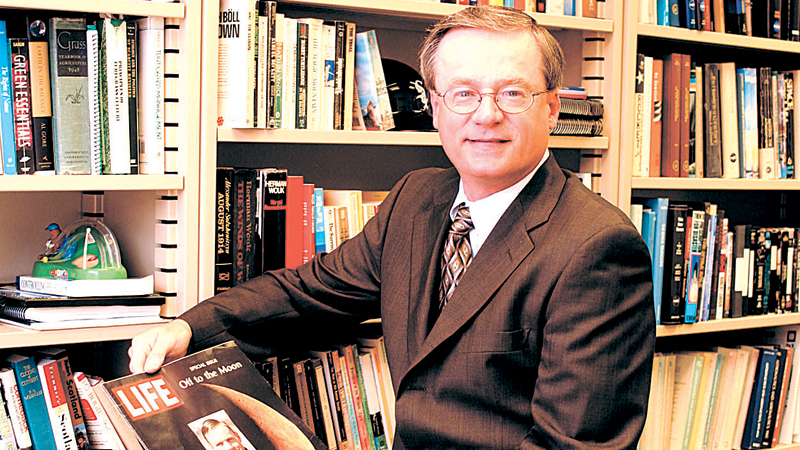 EDITOR’S NOTE: Some of our readers may remember an interview written by Bob Stark. Here is an update on one of our own, who grew up in Waynedale, Jim Hansen. Jim Hansen’s book, First Man, is a biographical story of Neil Armstrong, the first man on the moon. And today, more news on this exciting story/man written by Robert Stark, previous publisher of The Waynedale News.

Neil Armstrong first walked on the moon on July 20, 1969. In the 34 years that followed, Neil has given very few interviews and lived an extremely private life. Famous writers such as Stephen Ambrose and James Mitchner had vied for the privilege of writing Neil Armstrong’s biography but the task fell to former Waynedale resident Jim Hansen.

Jim Hansen grew up in Waynedale, just down the street from The Waynedale News. Hansen has an older brother Larry who is now retired and an older sister Carol, also retired.

Jim grew up in Waynedale in the sixties. He went to Waynedale Elementary, Kekionga, Elmhurst and IPFW.

Hansen earned a B.A. Degree with High Honors from Indiana University (1974) and a Ph.D. from Ohio State University (1981). He served as historian for NASA Langley Research in Hampton, Virginia from 1981 to 1993 and as a professor at the University of Maine in 1984-85. He has taught in the Auburn University History Department since 1986.

Jim has been married 26 years to Peggy Miller-Hansen, a nurse at the Auburn University Student Health Center. Together they have two children; Nathaniel, a 2001 graduate of Duke University, at the University of Alabama, Birmingham, and Jennifer, at Vanderbilt University, double-majored in French and Art History.

Hansen took a two-year leave to write the Neil Armstrong biography titled, “First Man.” Clint Eastwood and Warner Brothers picked up the movie rights to “First Man.” Jim made a trip out to Carmel, California where he played golf with Eastwood and Armstrong at Clint’s private Tehama Golf Club.

Director Damien Chazelle and star Ryan Gosling are re-teaming on the Neil Armstrong biographical First Man for Universal Pictures. Chazelle will direct from a script by Oscar winner Josh Singer (Spotlight). Filming is expected to start in early 2017.

The film is based on James Hansen’s biography “First Man: A Life of Neil A. Armstrong,” which is described as follows:
When Apollo 11 touched down on the moon’s surface in 1969, Neil Armstrong, became a legend.

In First Man, Hansen explores the life of Neil Armstrong. Based on over fifty hours of interviews with The intensely private Armstrong, who also gave Hansen exclusive access to private documents and family sources, “This magnificent panorama of the second half of the American twentieth century (Publishers Weekly, starred review) is an unparalleled biography of an American icon.”

Upon his return to earth, Armstrong was honored and celebrated for his monumental achievement.

“He was also misunderstood,” said James R. Hansen in this fascinating and important biography.

Armstrong’s accomplishments as engineer, test pilot and astronaut have long been a matter of record, but Hansen’s unprecedented access to private documents and unpublished sources and his interviews with more than 125 subjects (including more than fifty hours with Armstrong himself) yield this first in-depth analysis of an elusive American celebrity still renowned the world over.

In a riveting narrative filled with revelations, Hansen vividly recreates Armstrong’s career in flying, from his seventy-eight combat missions as a naval aviator flying over North Korea to his formative flights in the rocket-powered X-15 to his piloting Gemini VIII to the first-ever docking in space. These milestones made it seem, as Armstrong’s mother Viola memorably put it, “as if from the very moment he was born that our son was somehow destined for the Apollo 11 Mission.”

For a pilot who cared more about flying to the Moon than he did about walking on it, Hansen asserts, Armstrong’s storied vocation exacted a dear personal toll, paid in kind by his wife and children. For the forty-five years since the moon landing, rumors have swirled around Armstrong concerning his dreams of space travel, his religious beliefs and his private life.

In a penetrating exploration of American hero worship, Hansen addresses the complex legacy of the First Man, as an astronaut and as an individual. In First Man, the personal, technological, epic and iconic blend to form the portrait of a great but reluctant hero who will forever be known as history’s most famous space traveler.

For more information on Jim’s book First Man, go to waynedalenews.com/ and search for “Hansen prolog.”