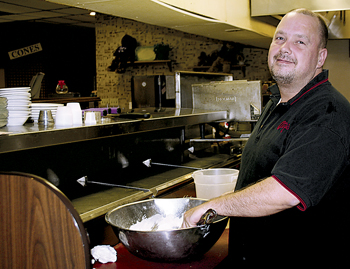 Puritan Ice Cream Company has been manufacturing good old-fashioned premium ice cream for decades. Back in 1922, located in Kendallville, Indiana, the ice cream was made using ice and salt-the old fashioned way-and delivered in a small truck packed with ice. All that ice was cut from Bixler Lake. At that time the company was owned by Ernest (Snakey) Wagner.

In order to compete, in 1924, ice cream businesses had to change over to mechanical refrigeration—that’s just what Puritan did.

Ralph Atz, Mr. Wagner’s son-in-law, joined the business, and in 1936, it became a family-owned business when they bought out the other partners.

The business was soon owned by the Atz’s as Mr. Wagner passed away. Mr. and Mrs. Ralph Atz and their sons, Norman and Lauren, kept the plant producing and delivering good old-fashioned ice cream.

In the late 70s and early 80s, two of Norman’s sons, Terry and Jeff started working for the company.

It was a hundred-mile radius that the Puritan Ice Cream Company delivered premium ice cream—but no longer.

According to Rosemary, Jeff and Terry’s mom, the decision wasn’t easy. She said, “We can’t continue because the repairs that are needed for the equipment is too costly.”

According to a notice in the restaurant, “Regrettably, this may result in an inability to provide our customers with the same selection of ice cream. We will continue to use Atz manufactured products as long as they are available and then search for the highest quality alternatives.”

“We will preserve our ice cream recipes and hope to be able to re-introduce limited amounts of some of the flavors you have enjoyed for such a long time.”

Atz’s is the kind of place the entire family goes to on Sundays after church, or where you can take the kids for a treat, for generations…

And, just like the trinkets, Eskimo Pie ads and newspaper clippings displayed in the restaurant, the dedicated employees have been around a long time. Bob Miller-cook, Albert Jackson-bus boy and waitresses Jan Willen and Elaine Chapin have been serving ice cream treats, some since high school.

The two remaining Atz’s restaurants will stay in business, despite the sting of a tough economy. North Anthony and Tillman Road locations will be serving their premium Atz’s ice cream for as long as the inventory holds out.