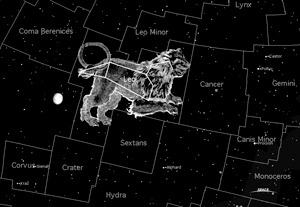 Look south in the early Waynedale evening to see Leo, the famous Lion of the Skies. Leo is one of a handful of constellations that really does look like its namesake. Leo, Latin for “lion”, is the 12th largest constellation, covering about 950 square degrees. Leo is notable for its many galaxies and multiple star systems.

To locate Leo, the Lion, look for a figure with five stars that remind you of a question mark turned in the wrong direction. These stars mark the head and mane of the Lion. Then to the left of the question mark, or Sickle as it is commonly called, are three stars of almost equal brightness that form a triangle. They mark the hindquarters of the Lion.

Regulus, or the King Star, is the largest and lowest in the Sickle. This star marks the heart of the Lion. Regulus is a white star and therefore very hot. It ranks 20th in order of brightness. Light from Regulus takes 85 years to reach us here in Waynedale. In ancient times, Regulus was brighter than it is now, and it was thought to rule the events of the heavens.

The Lion’s crouching body made up of a triangle of stars extends eastward. Denebola, a star of second magnitude, marks the tip of the tail. The name Denebola is from the Arabic language and means “lion’s tail”.

In Greek and Roman mythology, Leo represents the Nemean lion.

The Lion was a monstrous animal with a hide like armor. It could not be pierced by either sword or spear. Even the strongest warriors could not defend themselves against this lion. The giant beast roamed the hills and streets of the village devouring whomever it met. Hercules battled and slew the lion in the fulfillment of the first of his 12 labors.

Hercules battled the Lion for a full month. He was finally able to strangle the Lion to death. Hercules used the Lion’s own sharp claws to cut off the animal’s tough hide and wore it as a cloak and armor. Neither spear, sword nor arrow could injure Hercules as he continued on his next list of labors.

As we welcome the season of spring here in Waynedale, look in the night sky for the constellation Leo, the Lion. He is up there devouring the dark and cold of winter and brings to us the promise of warm days and starry summer nights. Now that is something to roar about!