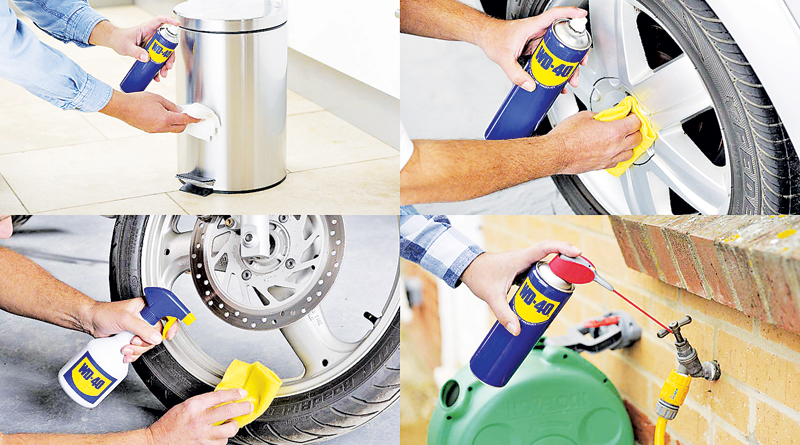 For every one of my 45 years in the hardware business, customers have been coming in asking for DW-40…..er, I mean WD-40. Whatever name our customers give it, we know what they want. When something is sticking, squeaking, or just not quite doing what it’s supposed to, WD-40 is one of the 1st things that comes to our customer’s mind. Here is a little history of that popular product.

WD-40 was developed in 1953 in San Diego. Chemists were trying to create a water dispersing product for the aerospace industry. After 40 tries, they were successful. Hence the name Water Displacement, 40th formula. Or as we know it, WD-40. And its first commercial use was to protect the skin of the Atlas missiles from rust and corrosion. Interesting!

I don’t know if it is still used on missiles, but personally I’ve used it for squeaking hinges and rusted bolts, taking stickers off my bumper, and I think years ago I tried to get the fan belt on my old pickup truck to stop screeching with a shot of good ‘ole WD-40.

The WD-40 website gives 1000’s of uses for their product. Besides using it for all things squeaking and sticking, have you ever tried these?: removing crayon marks from walls, removing ink stains from about anything, keeping snow from sticking to your snow shovel, and keeping garden tools rust-free. And a few more exotic uses listed were: keeping flies off of cows, repelling pigeons (they don’t like the smell), removing gum from wallpaper, shining shower doors, polishing brass and silver jewelry, unsticking 2 drink glasses stuck together, and a bus driver in Asia actually used it to remove a python from the undercarriage of his bus! They also noted that there is a misconception that WD-40 will cure arthritis. Not so, says the manufacturer. They won’t release what the secret ingredient is, but it is some sort of petroleum distillate, and they say there is no reason to be smearing it on your skin.

Now I don’t know about all of those uses listed above, but last week a customer of mine told me that when she was growing up in Kentucky, her dad used it for everything. Including getting the tobacco tar off his hands after harvesting his crop. Now that’s different! And as I was doing a little research for this article I saw a video of a guy stopping the squeak in his ceiling fan with a little of this water dispensing, 40th try, lubricant. And you know what? It worked in my house!

So if you have a situation that you think maybe a little WD-40 might help? Try it! If you come up with a fun use for it, let me know. And if you go after the cows or pigeons, I want pictures!

Dave is the owner of Umber’s Do it Best, which has been a family owned and operated establishment in the Fort Wayne community since 1944. Whatever your project needs are, we can help. Stop in today at 2413 Lwr. Huntington Rd. Ft. Wayne, In 46809. Call (260) 747-3866 or order online umbers.doitbest.com

> More Articles Written By This Writer