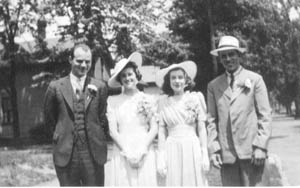 And then it was December 7, 1941. My brothers, cousins and many friends were drafted and fought in Europe and South Pacific. We lost a wonderfully loveable young neighbor in Germany. He was almost part of family, so dear to us. My oldest brother was wounded on Okinawa. The younger brother served in Japan during the so-called “mop up”. Somehow we got through the terrible long periods when we heard nothing when we were not sure if that was better than to hear some of the horror stories that were reported. At least life seemed to settle once more into the familiar patterns we had known but when I look back today, I realize life is never quite the same after a war. I had married. My husband and I set about building a home with the help of family and friends. The basement was dug by hand and the house was built by two of us with lots of help. We had the rough plumbing and wiring done by contractors since my husband had no knowledge in those areas. He could do the plastering for that was his trade. I helped put down hardwood floors, tile in the kitchen and bath, and anything else I could do.

Five years after our house was complete our oldest son was born. Four years later his little brother came along to make our family complete. Life was good.
The boys grew, we added three rooms to the house, and my husband (an avid gardener and greens houseman from Broadview Florist) again a little greenhouse of his own. I had become interested in ceramics. I had my own kiln and a few friends as students beginning in 1965.

Our three sons went away to college after graduating from high school. Yes, we had a foster son at that time, a classmate of our youngest son. The oldest son graduated from college and came home to find a job. And we began to hear of a place called Vietnam. Where was this place? Why were American soldiers being sent there? The answer to the last question will never be fully explained or understood by a lot of Americans. On Halloween, the oldest son received his draft notice and we soon learned WHERE Vietnam was. The younger two scanned the newspaper listing and were horrified when their best friend was called. Our foster son was not called but the middle son was. So we had our two and all their friends in the military. The oldest son served in Vietnam. He came home to us and to a wife and a baby daughter. For this, we praise God! The middle son completed basic training and joined the Army National Guard Reserve. Later, he became a full time Army National Guardsman and served in that capacity until 25 years later an injury caused early retirement.

My husband retired in 1975. Prior to that he helped our youngest son and me set up a ceramic studio in a nearby mall. Our studio was in business until 1981. After that I went back to my studio at home and continued teaching until 1999. My first class had been taught there in 1965. There are so many memories all those years, from the $5.00 Christmas to my new home here by the railroad again. I watch the trains go by. There are no longer steam engines but streamlined giants going along without the familiar smokestack. And there is no longer a caboose a little red exclamation point at the end of the train!

There are still some familiar names on the boxcars-the sleeping item, Chessie, for example. More names are foreign from around the world. Some of the boxcars are different in size and shape. A friend, who is a railroader, says some of these come across the sea stacked on freighters. Eventually they go to the railroad and then to the highway as part of a tractor-trailer rig.

I do not see men riding the rails here and do not know if, across our land they still do. As I watch the stock market fluctuate and listen to talk of our “booming economy”, I wonder if there will ever be a time where men and their families will be compelled to move about searching for work, new homes and security. I hope not. Those long ago times were very hard and I do not wish to see them repeated.

Today’s young people have been so pampered and spoiled. I wonder if they could survive such a time. They may not have the courage or the stamina. But there are those in every generation who are made of stemmer stuff. So, hopefully, there will always be.

I know those of us who came through our bad times seem to have a different sense of appreciation of parents who held their heads high and kept families together. Parents who taught us respect for others and courage to carry us through the bad times we might face later. The years have come and gone. For me there was a good, solid, loving marriage, children of whom I am very proud. And now there is hope of the future grandchildren and great grandchildren all of whom I cherish.

I miss those who are not here with me anymore, but they live on in my memory. I shall never really lose them.

And so now I’ve come full circle at home again by the railroad in a home I enjoy full circle, seventy plus years later.