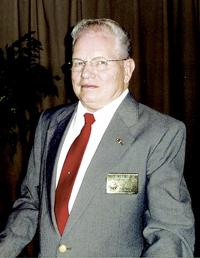 David Wilkins works in a hair salon during the day, but once a month he goes to the Allen County Public Library to produce and host a monthly program called “The Speakers and Leaders Hour.” How did a gentleman with a high school diploma rise to such a position? What gave him the edge to be able to speak and run a television program? Stay tuned!

David Wilkins was working in a hair salon in 1985 when his insurance agent invited him to visit Anthony Wayne Toastmasters. David had been looking for a way to better voice his faith to others and thought this might help. They were doing a “Speech Craft” project for six weeks and David figured he could handle going to six meetings to improve his speaking ability. After six weeks, he discovered that there was still much he needed to learn about public speaking and so he joined.

In 1987 the Baer Field Toastmasters started another “Speech Craft” course, so he attended those meetings. “They had a lot of really neat people…some of whom left.” But at the end of the course, David joined their club also. “They say 50 percent of success is just showing up and I had some new goals to meet.”

In 1989, David attended a parliamentary club meeting. Their meeting schedule was very erratic, so he proposed a motion to meet every month. It passed and he joined.

In 1991, Bob Leiman started a pre-taped monthly local television program called “Let’s Have a  Meeting” and asked David, a fellow Toastmaster, to help. In 2002, the program became a one-hour live show broadcasting locally the first Tuesday of the month and called the “Speakers and Leaders Hour.” David took over producing and running the program and has Bill Cartwright and Leon Kowalenko as his co-hosts.

This year they kicked off a new feature—periodically having a Toastmasters meeting for the evening’s program. Baer Field Toastmasters was pleased to open the event.

In 1995, he portrayed Henry Roberts, the author of the handbook on parliamentary procedure, at a Parliamentary Convention at William and Mary College. He was also among several parliamentarians that the Soviet Union asked to come and teach them how to run business meetings and debates after the fall of communism there. Unfortunately, he was not able to go at the time.

When asked what has kept him with Toastmasters for 25 years, he replies, “I enjoy watching people grow in their speaking and leadership. It has improved my relationships with my family and in my business and opened doors of opportunity I would have never imagined.”