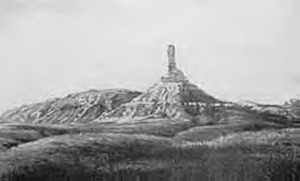 Grandfather Daniel and his company were on day 35 of their adventure to the gold fields. They had traveled from Independence, Missouri to about the middle of Wyoming. They were still traveling along the Platte River, which is shallow and wide.

June 8, 1850…Marched today 18 mile and encampt on the Platt again. We had hard wheeling today for the sand has been very deep. I saw an Indian grave all scaffold up on pine forks and wrapped up in a buffalo skin and tied to the scaffold and a carpet over him and his shot pouch hung up over him. It is a peculiar way to enter the dead. We past some more Wigams today, 12 in number. These Indians are friendly…they are the Sue…we come in the Sues when we crost the South Fork. We are now within 20 miles of Fort Laramie

June 9…As it is Sunday we are laying over and resting our oxen. About 3 o’clock Ira Wiley called by and he and I had a long talk. He is the only man that I have saw that I new since that we have been out except my own company and he tells me that William Goodman died a few days sense with the diaree and caught cold.

June 10…Marched today 18 mile and encampt on the Platt as usual. About 1 o’clock Michael Giltner and myself started and went out to the Court House Rock and went up on the top of it. This rock is about 500 feet above the level of the earth around it and has the appearance of a house and is perpendicular on three sides. On the north side is so that we could ascend with much difficulty. We started back to our wagons and we got ahead of them and got lost from them and could not find them and we fell in with some Missourian and we staid all night with them

June 11… Started this morning at daylight and could not find them and we fell in with some ills and got our breakfast and they charged nothing. We traveled today 15 miles.

June 12…Found our wagon last night and they traveled today 30 miles and encampt on the Plaines. We past the Chimney rock. This rock is the shape of a canvas, only the chimney runs up 100 ft. We passed the Scotts Bluff and a trading post and come on the Platt again and encampt on a stream called Horse Creek.
Chimney Rock is located twelve miles west of Courthouse Rock. It was one of the most picturesque landmarks along the Oregon Trail. It signaled the end of the prairies, as the trail became more steep and rugged heading west towards the Rocky Mountains. Many drawings of it were made by surveyors and artists and, most pioneers mentioned it in their diaries. Travelers reported that it was visible forty miles away.

June 13…Marched today 18 miles and encampt on the Platt in 16 miles of Ft Larame. We passed another trading post.
Fort Laramie was begun by fur traders as Fort William in 1834 where the North Platte and Laramie rivers meet. In 1849, the U.S. Military purchased the fort and named it in honor of Jacques La Ramie, a local French fur trapper.

One of the most important forts in the settlement of the American West, Fort Laramie served many functions throughout its history. It was located along the Oregon Trail to protect and supply emigrant wagon trains. It later became a major link in the Pony Express, Overland Stage and transcontinental telegraph systems. It also served as a base of operations for the High Plains Indian Wars. Since 1937 it has been preserved as a National Monument and is maintained by the National Park Service.

June 14…Marched today 18 miles and crost this Larame fork of the Platt which is a beautiful place. We crost the Bluffs and encampt on the main Platt about 3 or 4 miles from the fort. We had to raise our provisions above the platform and my book and paper was placed such that I could not git at them and could not write back to you as it rained and my feet was so that I could not walk back but I commenced a letter and did not git it finished at Noon

June 15…Marched today about 18 mile and encampt on a little stream in the Black Hills. We have past over some very rough road today and we had to all wade the river yesterday and S. Thompson has had a chill today. I hope that it will not last long and M. Giltner is sick today. We don’t know what is the matter with him .