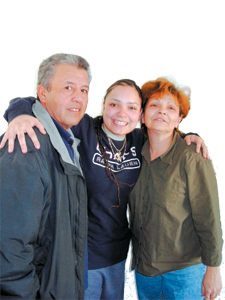 The Waynedale News caught up with Amanda Perez on Tuesday. Amanda had just returned to Waynedale after doing a benefit concert Saturday in San Diego. The concert was held to raise awareness and money in the case of kidnap victim, Danielle VanDam. Amanda finished the San Diego concert and then came back to Waynedale to begin preparing for an upcoming concert at the Memorial Coliseum. The concert (The Big Schizzo) will happen on February 21st and is being sponsored by WJFX-FM/HOT 107.9

I asked Amanda how she managed to get into the music business. “I was four years old when my Dad, Andy Perez bought me a fifty dollar accordion, called a ‘Tex-Mex’. I have always loved music and used to perform with my uncle, Robert Perez, who had a band called ‘LaSombra'”. Amanda also plays keyboard, drums, electric guitar, and base. She writes her own music and hopes to expand into other areas of show business as her career continues. Amanda has been developing her musical talents since the old Tex-Mex accordion days. She can still hear her mother Linda, telling her, “quiet down” during her many practice sessions in her room.

Amanda attended Lakeside Junior High School and then went to North Side High School for one year before leaving school to pursue her musical career. She won a talent contest and continued honing her skills as she worked other odd jobs. She remembers one of her North Side teachers telling her she would never make it. “I was hurt, but I focused that disappointment into one of my early singles, called Where You At.”

Just last March Amanda was working at a cleaning company. “I hurt my leg” Amanda said, “and needed help that evening to get my work out. I asked my friend Shanelle to come in and help me. The boss caught us and I was fired. I was hurt and embarrassed, and it was a low point in my life. When I went to pick up my last paycheck I found they had shorted me some money. I was using that money to try to produce my first album.”

There was a talent scout in town that was looking for local musicians. Mike Q. worked for a California company. He had heard about Amanda, so he stopped by and asked her for an 8X10 glossy and a copy of her music. She gave him a single she had just finished for her album. Mr. Q left for the airport leaving Amanda alone with her dreams. Just prior to landing in California, Mr. Q popped the single in his portable player and listened to Amanda’s recording. He got off the airplane, boarded another plane and headed back to Waynedale to talk to Amanda, his newest star.

Amanda has recently signed with Universal. Her hot new single is called Never. She enjoys performing Rhythm & Blues and Hip-Hop. She is also a Rapper. She now has a condo in Northridge, just outside of LA, but still considers her parents’ place in Waynedale home.

As we were talking, Amanda’s mother came over and sat down with us. (She had been in the family room caring for one of her grandchildren.) Amanda’s nephew Angelo Russell sat with us and then her sister Adalia came in. Amanda’s brother Andy Jr. dropped by and her best friend Shyra Powell was there. Her father, Andy came in as The Waynedale News busily snapped pictures. It was obvious that this young, talented 21-year-old Waynedale star is going to draw a crowd no matter where she goes. I mentioned to Amanda that sometimes stardom is short lived and asked her how she was handling all the attention. She just smiled and said, “Even if it all goes away, I’ll still have my family and my music.”

Good luck Amanda and keep focusing those disappointments and frustrations in a positive direction.