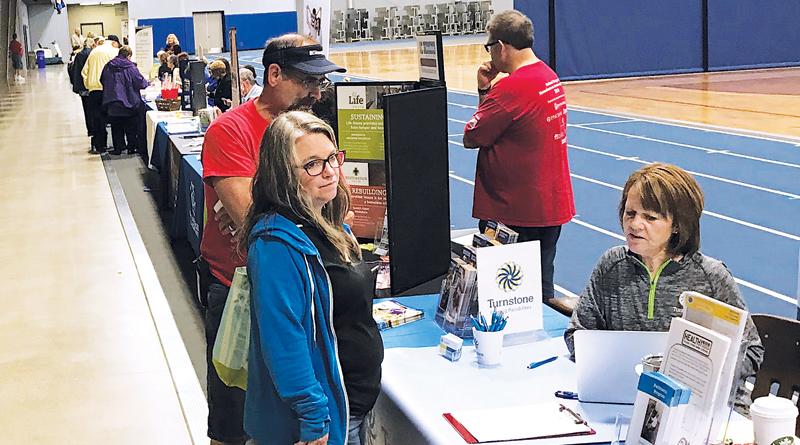 Fort Wayne’s Turnstone Center recently celebrated its 75th anniversary with an event designed to celebrate – and assist – our community.

On the very day of its birthday – October 8 – the center, located at 3320 N. Clinton Street, held the annual Community Health & Information Fair from 8 a.m. to noon.

Welcoming the public into the building for everything from blood pressure, vision and bone density screenings to blood tests for cholesterol and blood sugar; to flu shots and other immunizations; to breast cancer screenings from Francine’s Friends Mobile Mammography inside its mobile testing truck, the fair drew dozens of eager folks looking to find out more about local agencies and, perhaps, check out their health at a reduced cost.

Sponsored by organized labor and the local United Way, the event was open to those 18 and older, and was free to attend, although some of the health tests did cost a nominal fee.

“This facility has a lot offer,” said Mike Bynum, Director of Labor and Community Services for the local United Way. “And one of the main reasons we put this event on is – as a community – we have a responsibility to help each other, to make Fort Wayne a good place to live and retire. This is really about helping people be exposed to services they might not otherwise know about.”

In fact, guests could receive a “Bingo” card showing all the logos for the agencies in attendance, and get them marked for each group they visited. Once their card was marked by all the groups they had seen, they could enter their card into a sweepstakes to win a $25 Kroger gift card, Bynum said.

“The vendors are just great,” Bynum said, “and they’re very supportive of our guests here today.”

The fair also garnered the help of about 20 volunteers who helped work the event. Most were retirees who had been active members of organized labor, Bynum said.

The history of the event actually goes back about 25 years, according to Sally Zuber, a retiree from the United Way, who has worked the fair since its inception in 1993. That first year, she said, it was only held for United Auto Worker retirees, and was done at the UAW Local No. 57 Rec Hall, located off U.S. Highway 27. “The CEO of Parkview was on our board at the United Way,” Zuber said, “And he helped come up with the idea of a health fair for retirees.”

In 1996, the fair moved to Turnstone, and was opened to all retirees, not just those from the UAW, she said. Later still, the United Way opened the event to the general public.

She said the event really has evolved into a way to get out information and help those who may not have the money to get tests done at their family physician.

“We’re really just trying to reach those who may not be able to afford to go to the doctor,” Zuber said.