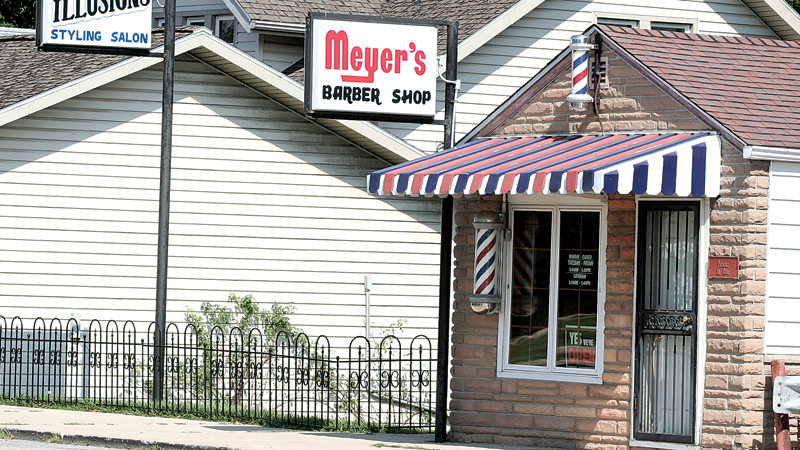 Meyer’s Barber Shop is a Waynedale staple, although surprisingly only about half of their clients are from the immediate area. The other half coming in and out of the barber side are from local factories that dot the Waynedale and Airport Expressway landscape. One regular customer drives in from Coldwater Michigan for his haircut. Bob Chase was also former client. And their success is all due to word of mouth from satisfied customers.

The shop originated in 1926 by Henry Meyer. Its first location was in Yoder, then he moved it to Poe, finally settling down in Waynedale in 1932. The building itself was a doctor’s office before the depression. The business is truly a family affair, spanning three generations.

Henry’s son Wayne, first attended the Purdue Extension, thinking he might want to become an engineer. He changed direction and attended the Union barber school in Indianapolis, then worked for UPS in Indy for a while. In 1965 Wayne joined his dad in the barber business.

Wayne, along with a 79 year old regular customer, reminisced of how local businessmen Dale Elzey and Howard Hoch always lent a helping hand to many businesses, allowing them to pay the loans back when they were able. Waynedale was the largest hamlet of the old village as they describe it. Businesses took care of themselves, and were very proud that they did not have to go on relief or assistance.

Both Wayne and this steady customer fondly remembered the street fair, sponsored by the area merchants association, which lined the road in front of Meyer’s Lower Huntington Barber Shop. When asked why he has frequented Meyer’s since the early days when Henry owned it, the shy senior customer, who wouldn’t share his identity, replied that “he enjoys coming as everyone is so talkative. Plus he needs to keep his hair cut or else buy dog tags” he chuckles.

The shop is open Tuesday through Saturday and keeps Wayne, and his son Matt, very busy. When his dad suffered an aneurysm at the age of 54. Matt learned the business through baptism by fire. Wayne thanks God that his wife of 48 years, Mary, was there when the aneurysm hit. Wayne says “she saved my life.” As Matt took over the shop while Wayne recuperated, he was in for a quick learning curve.

On the backside of the barber shop is the Beauty Shop. Mary Meyer uses one of the booths for her clientele and there are three other stylists who rent booths as well. They’ve added onto the building at least three times, expanding it from the tiny shop that was its roots. “They are all one big, mostly happy, family” says Matt with a smile.

The Meyers not only spend time together every day at the business but also enjoy weekends collectively at Lake James where they own a cottage. Wayne and Mary have a daughter too, who resides in Iowa and three grandchildren; one girl and twin boys. Plus they boast grandkids of the four legged variety: horses and dogs.

Wayne and Matt wouldn’t share just how many customers they have coming through the doors but it’s certainly steady enough to keep them both busy. With no appointment times, sometimes it’s standing room only while people pop in over their lunch hours. Other times it is quieter and you might find Wayne or Matt catching up on reading or playing on their IPads until the next customer strolls in. They agree that in barber school, you are not taught a lot about how to deal with people. Building relationships is something that is acquired along the way. Another thing they note is that you can always tell when there is a full moon outside.

I asked Wayne about the significance of the barber pole, a proud emblem outside his shop. He told me a story about bloodletting. Excuse me? My research tells me that Wayne was spot on. In the old days, people went to their barber for not just a shave or a haircut but also for bloodletting and other medical procedures. Bloodletting involved cutting open a vein and draining blood as a treatment for many maladies. Sometimes barbers also pulled teeth, set bones and treated wounds. The look of the barber pole is linked to bloodletting, with red representing blood and white representing the bandages used to stem the bleeding. The pole itself is said to symbolize the stick that a patient squeezed to make the veins in his arm stand out more prominently for the procedure. In America, the poles are red, white and blue. One theory holds that blue is symbolic of the veins cut during bloodletting, while another interpretation suggests blue was added to the pole as a show of patriotism and a nod to the nation’s flag. Bloodletting fell out of favor in the 19th century. I’m sure Wayne and Matt are relieved that isn’t one of the criteria for them to be barbers nowadays!