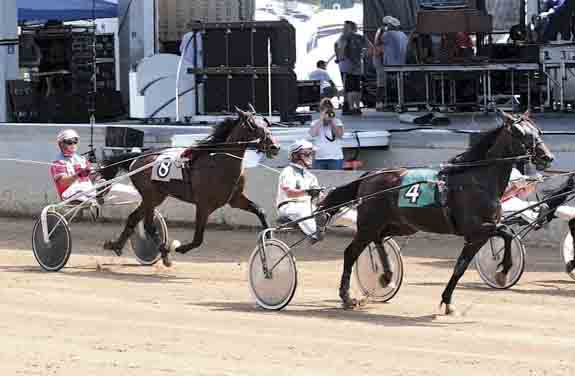 Waking up at 4:30am on a Saturday is not everybody’s idea of a good day. But for me, it was a great day! I was on my way to meet up with a few great guys and gals, actually they’re called colts and fillies, on their way to the Elkhart County Fairgrounds. It was race day!

Arriving at Single Tree Farm, a racing stable in Hicksville, Ohio, we began prepping the horses, then proceeded to load them into a 5th wheel horse trailer. Leaving the gate at 6:10am, we were quickly on our way. Owner, veterinarian by profession, Dr. Doug Bruinsma, had 6 horses entered in the trotter classes.
Once at the clay oval race track in Goshen, Indiana, my heart began to race, just like the horses on the ½ mile track. There were 8 races for trotters, and “Doc”, as many of the regulars called him, was prepared to race in 6 of the 8.

We pulled in finding a great spot alongside the track where Chad Peter, Doc’s trainer-driver, had reserved canvas tent-style stalls. Horses, tack, harnesses, water buckets, brushes, leg wraps, everything needed for equine supplies was unpacked and setup. We gave the horses one last drink and then proceeded to groom, harness and place tendon boots on the front legs and brace boots on the trotter’s hind legs before Chad hopped onto the bike (term used for racing sulky carts) for a few laps around the unfamiliar track so each horse could get use to things like grandstand noise, flags flying, pilons, the crowd.

Timing was crucial in getting each horse harnessed, exercised and ready. Chad took a few for a spin and then Doc hit the track.

Race 3 on July 23, 2011 post time was 11:30am. Conditions-Indiana Sired Fair Circuit 2-year-old Filly Trot 3rd division. Distance: 1 mile. Purse: $3,000, read the program. Doc looked over the post-position draw for the first horse up named Chipper Doodle. It wasn’t good. She was 8th position out of 8 in this Saturday’s race. Chipper Doodle, by Chivas-Merit and Bowl of Chips, showed good starting gate manners. This 2-year-old filly stepped off placing 5th, with a finish time of 2:13.1.

“Not much time between starts,” harness driver Chad Peters comments as he rushes to attach the racing bike to the next horse on board, thekidlovestherail, produced by Cincinnati Kid and Last Rail.

In Race 5 – Indiana Sired Fair Circuit 2-year-old Colt Trot 2nd division, Onepointeightsix was entered. His draw 7th out of 7. With tremendous heart and desire, this colt was ready to race from the time the trailer pulled onto the grounds of the track. He was in great position at the start of the race but..never had a chance because of the way the racing flow went. He ended up 4th in the race with a time of 2:12.4. Onepointeightsix is a gifted-gated colt that may not be caught in the future, give him a few races.

“A trotter can be first (out of the gate) and end up last. That’s when you need some racing luck,” I was told.

Occasionally, a horse goes off stride. Straight out of the rulebook, when your horse goes off stride, the driver must pull the horse to the outside of the track where clearance exists. (I noticed that with other drivers this sometimes fails to happen.) But after regaining his stride, they could go on to win by a three or even four length victory.

Conversation to and from the track was very enjoyable, educational and quite entertaining. Dr. Bruinsma spoke of how he names the foals. On one occasion, he recalls, three foals were born just hours apart. He was exhausted and running out of creative names. So, he asked his wife. Linda said, “Name her Chipper Doodle.” “Her dam’s name is Bowl of Chips. And I just made some cookies called Snicker Doodles.” Other names in the stable are: Kinda Kinky, Luvnwatido, Onepointeightsix (this is the speed of light right?), Tailgait Party, Outside the Curve, and threepointonefour (could this be referring to a circle?). Remember the movie Seabiscuit? The true story of the undersized racehorse? Well, from Seabiscuit came a foal’s name-Land Muffin. And, the list goes on.

This trainer, and sometimes driver, of Standardbred trotters, has never looked back on his decision of harness racing. He loves what he does. He begins each morning before the rooster crows, feeding, grooming and caring for his trotters. Heads for a day at the office—East State Veterinarian Clinic, 3319 East State Blvd., Fort Wayne, Indiana treating four-legged animals, then ends his day putting his own horses through their paces on a neighborly track next to his stable.

Dr. Bruinsma will be making his way to Indiana Downs in suburban Indianapolis this weekend with Primer Cap and Good and Gone. He says, “It’s an entirely different atmosphere with the parimutuel track. The racing is a huge step up from the fair stuff.”