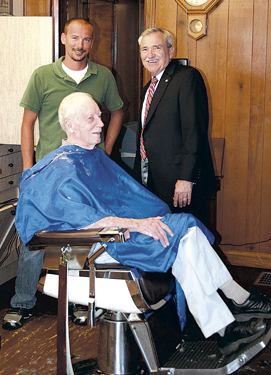 I started the month of July with a wonderful walk through Waynedale to visit with business owners and employees. What a treasure Waynedale has with a number of locally owned, small businesses that serve our city and beyond.
On the walk, I heard from business owners that times have been tough in the great recession but that things are starting to look better and brighter. The economic downturn has not been kind to our local economy, including the City of Fort Wayne, but I am confident that things will turn around.

In my time as your mayor, I have always enjoyed the opportunity to meet with the people I serve: on business walks, neighborhood walks, small-business breakfasts or Mayor’s Night-In events. These are places where I have the chance to listen directly to your concerns and sometimes even your compliments. I also engage my staff in these events to be able to start addressing the issue immediately.

Thank you to the business owners and employees of Waynedale who welcomed my staff and me earlier this month. I was happy to receive a Waynedale cap from The Waynedale News. You’ll be happy to know it’s prominently displayed on a ledge beside my desk in my office at Citizens Square.

Several residents asked about the resurfacing project on Old Trail Road. By the time you read this column it should be completed. This concrete repair project was to fix some cracks and breaks in the street just south of Lower Huntington Road.

The warmer summer temperatures give us key good months to complete some important road projects around the City and in Waynedale.

Below, you will see several additional road resurfacing projects that will be going on in your neighborhoods throughout the summer.

The 2011 transportation projects are about making Fort Wayne a place where businesses can prosper, bringing hundreds of good-paying construction jobs to Fort Wayne today, and strengthening neighborhoods in every corner of the City.

In 2011 we are investing $20.6 million to improve Fort Wayne’s roads and infrastructure, generating over 300 construction jobs and another 300 jobs resulting from increased economic activity. According to federal data, these investments will generate as many as 600 new jobs in Fort Wayne (“Employment Impacts of Highway Infrastructure Investment,” U.S. Department of Transportation, 3/29/2010).

I’m proud to announce these projects will be financed primarily through federal and state dollars, not local taxes. Every time we fill up at the pump we’re paying almost 20 cents a gallon to Washington. I’ve been fighting to bring these tax dollars back to Fort Wayne. An investment in our roads, streets and trails is an investment in the long-term economic health of our City.