In the past five years, more than 300 miles of neighborhood street improvements have occurred in the City of Fort Wayne. This year, we’re going to have another tremendous year of infrastructure upgrades in neighborhoods throughout Fort Wayne. A record $31 million will be invested in neighborhood transportation improvements in 2019. By working together with neighborhood leaders, City Council, and our Public Works Division to plan our projects for this construction season, we’ll be able to make a lasting and meaningful difference. The investments we’ve made over the last several years demonstrate that neighborhoods, the backbone of our City, are a top priority.

With this year’s funding, the City has invested an unprecedented $130 million in neighborhood transportation improvements since 2014.

There will be projects in more than 190 neighborhoods including alleys, sidewalks, ADA ramps, concrete, asphalt and chip and seal streets, and new trails. For a complete list of 2019 projects, visit www.cityoffortwayne.org/invest

Highlights of the 2019 Projects:

Our Community Development Division recently released its 2018 Report to the Community and it’s a great summary of the division’s many accomplishments.

Community Development staff work every day to make Fort Wayne a more vibrant, prosperous and growing community. They work to promote lively, safe and healthy neighborhoods that provide affordable housing choices for all residents. Staff also help revitalize properties that were once vibrant but are no longer useful. Finally, the Division works to ensure strong economic growth.

In 2018, the Community Development Division:
– helped 19 local homeless residents and their families find permanent or transitional housing,
– granted 11 neighborhood associations up to $5,000 to beautify public spaces,
– ensured 2,205 properties were cleared of trash and debris,
– approved 19 loans to area small businesses,
– invested more than $300,000 in helping clean up brownfield sites,
– approved more than $11 million in infrastructure work,
– managed the planning for the next exciting phases of Riverfront Fort Wayne, and
– provided funding and support to many local housing and business developments, such as The Landing, Superior Lofts, Bottle Works Lofts, Byron Health Center and more.

Want to learn more? Take a moment to review Community Development’s 2018 Report to the Community and share it with your colleagues: www.fwcommunitydevelopment.org/images/about_us/docs/012019_CD_RTTC_4web.pdf

Congratulations to all the hard-working professionals in Community Development! 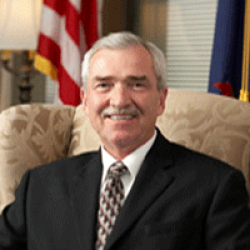 A lifelong Fort Wayne resident, Mayor Thomas C. Henry is committed to public and community service. He was elected to his first term as Fort Wayne's Mayor November 6, 2007. Mayor Henry authors the "Message from the Mayor" column.