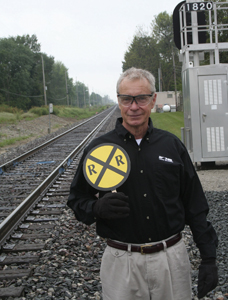 Operation Lifesaver, Inc. (www.oli.org), the national rail safety educators rolled down the tracks this week reminding drivers, pedestrians and bicyclists to avoid distractions at railroad crossings because there is no second chance if you meet a train.

In the quest to raise safety awareness and decrease the number of incidents, Operation Lifesaver was launched in 1972. The campaign partners with the railroad companies to help educate the public about the basic safety principles of railroads and trains.

Operation Lifesaver and Norfolk Southern are visiting Waynedale schools as part of Railroad Safety Week. “Using extreme caution around all trains and railroad tracks is a safety lesson that will benefit children – our most precious cargo,” explained Norfolk Southern Engineer Doug Wylie.

The lessons, Mr. Wylie explains, include, “Never walk down a train track”; it is not only illegal, because this is private property, but it is also dangerous.

Railroad lines in the Waynedale area have recently increased the speed of a train coming down the track carrying everything from food and lumber to metals and hazardous materials. Of course, you won’t have to wait as long at the crossing but that also makes it more dangerous.

“People underestimate the danger level present on a railroad track,” Wylie said. “They misjudge the speed of a train and think that because it’s hulkee, they’ll have plenty of time to get out of the way, but really, these trains move quite quickly.”

A train cannot stop quickly he said. It is a simple law of physics: the huge weight and size of the train and the speed of the train dictate how quickly it can stop under ideal conditions. A typical locomotive weighs approximately 400,000 pounds or 200 tons. When 100 railcars are added to the locomotive, the train can weigh approximately 6,000 tons. Once a train has set its emergency brake, a 100-car freight train traveling at 55 miles per hour, will need more than a mile to stop — that’s approximately 18 football fields! The weight ratio of your automobile to a train is proportional to a soda can and an automobile.

Mr. Wylie goes on to explain, “There are over 200,000 miles of railroad tracks in the United States. Trains can move in either direction at any time. And today, trains are quieter than ever! No ‘clackety-clack.’ So, always expect a train at every railroad crossing.”

Mr. Wylie is encouraging parents and teachers to talk to the children about the importance of safety at railway crossings and about the potential danger of walking, riding or playing near the tracks.

A train may extend three feet or more outside the steel rail, which makes the safety zone for pedestrians well beyond the rails themselves.

Safe biking near train tracks is also important. Last year, more than 760 people were killed or injured in the U.S. while illegally walking, bicycling, or otherwise playing on railroad tracks or property.

Did you know that trains have the right of way 100% of the time — over ambulances, fire engines, cars, the police and pedestrians?

This public awareness campaign in Waynedale is a call to action to not only children but to everyone to help put an end to accidents, injuries and fatalities on and near railway crossings, tracks and properties. Operation Lifesaver – Lake Division says there were 98 railroad crossing collisions in Indiana last year resulting in 14 deaths and injuries to 36 people. Indiana ranked 4th highest in railroad crossing collisions.

The community of Waynedale is grateful to Doug Wylie and Operation Lifesaver for bringing railroad safety to our schools and for reminding drivers and pedestrians that it only takes an instant for lives to change. Remember – Any time is train time! When you come to a railroad crossing, the decisions you make can mean the difference between life – and death.

~ CROSSING TRACKS ON A BICYCLE REQUIRES CAUTION AND EXTRA ATTENTION! Narrow wheels can get caught at crossings. If possible, walk – don’t ride – across. Always cross at a 90-degree angle.

~ USE ONLY DESIGNATED RAILROAD CROSSINGS. The only legal and safe place to cross railroad tracks is at a designated public crossing with a crossbuck, flashing red lights or a gate. Crossing at any other location is trespassing and illegal.

~ TURN OFF MUSIC AND REMOVE EARPHONES AT ALL RAIL CROSSINGS. Music can be a deadly distraction near the tracks; the sound may prevent you from hearing an approaching train. Trains are quieter than you think, go faster than they appear, and do not run on set schedules.

~ WET TRAIN TRACKS CAN BE SLIPPERY. Dismount and walk your bike across the tracks.  Step over the tracks – not on them – to avoid slipping.

~ NEVER RACE A TRAIN TO THE CROSSING. Even if you tie, you lose.

~ RAILS AND RECREATION DO NOT MIX.

~ WATCH OUT FOR THE SECOND TRAIN. Your view of a second train might be blocked by the first. Wait after the first train passes until you can see clearly in both directions.

~ IF YOU SEE A TRAIN COMING, WAIT! Flashing lights or a lowering gate means a train is approaching. Do not proceed until the gates go completely up and the lights go off. It is illegal to go around lowered gates, whether on a bike, on foot or in a vehicle.