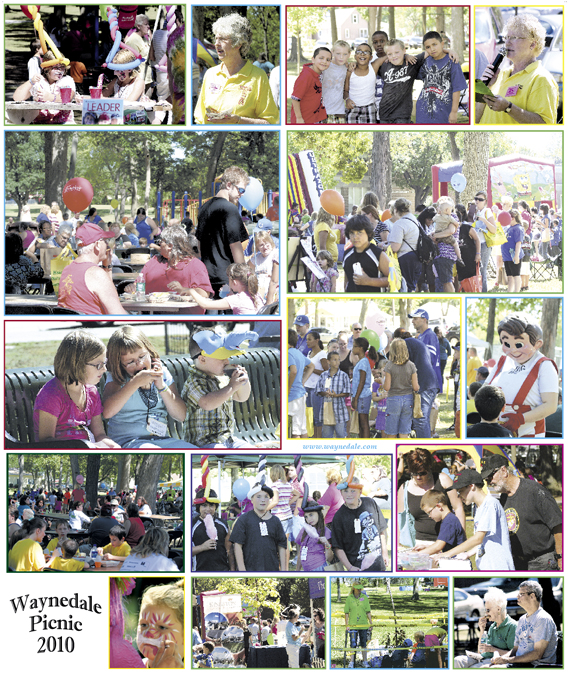 Waynedale is a great place to live and work for many people, so the idea of the picnic began. This was our 8th year to bring the children together for food, fun and just a great day of sharing. The concept started with an idea to bring people back to the Waynedale Park and what a great way then with a free picnic. We decided to mail out letters to over 200 businesses, neighborhood associations, and private citizens in May prior to each picnic. We elected to pick a date at the end of August to have a lot of the local children and families come, since school was back in session. This “Picnic in the Park” is most unique for everyone involved as our volunteers take their time and money to support our community. Colorful banners are placed along with other signs around Waynedale to inform those of the date & times at the park.

This year was probably the best with the great weather and increasing amount of people attending.

Everyone was asked to sign in for door prizes that were called throughout the day. The 9 different children’s games were played for small toys and tables of craft-making items to entertain them. There were balloon-makers, face/tattoo painters along with the drawing of caricatures for all to enjoy. The children played on the moonwalk, play land, and sticky wall were all fun to watch. Now for adults, they listened to the DJ playing great music or were able to play bingo to win free prizes.

The food donated and purchased included pizza, hot dogs along with chips, nacho chips and salsa, cookies, cake, ice cream sandwiches and juice or water to drink. The food tent served over 1300 people as most picnics here do. We know some people do not sign in so it is difficult to get a true head count. Some people just come too late to register but then watching is fun too.

Vendors were asked to join the festivities to inform the adults and kids of businesses around the area. Many of the vendors gave away free items like popcorn, cotton candy, balloons, and candy to those that could stop by their booth. Great advertisement for companies and learning for all. Children’s DNA, finger printing, and information were also donated by the Mason’s across from the park. We had over 12 great vendors and some dancing to music of their own. Others that attended were racecars and drivers, police and many others. The F.O.P. gave away over 250 bicycle helmets to those children that came to their area. But you must know that we had over 600 children attending this year. Many of the ages are from 0-13 years and some teenagers as well.

This year we were concerned over the number of volunteers and the costs going up to support the picnic, but overall everything worked out fairly well. We never have enough volunteers for our children’s games due to the heat and time involved but maybe next year we will be blessed with more. The money donated by organizations having fundraisers helped save this year’s picnic along with all the other great companies and personal donations. We thank all the routine supporters especially those that give generously. It is true that without each of our great volunteers we could not do this year after year. The Waynedale Picnic in the Park will go on for as long as we all can, so remember to give and next year’s will be even better. We are sure that good news spreads fast and thanks to The Waynedale News for supporting our community.