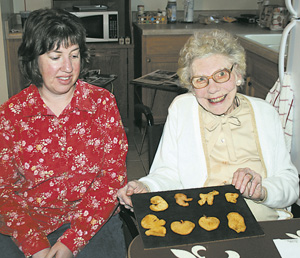 Do you remember staying up late and watching Johnny Carson—the King of Late Night television? Heeerrrre’s Johnny! He would entertain us with people like the nut lady, the potato chip lady, and a few others like them. But did you know that the Potato Chip lady lives right here in Waynedale? Yes, she does. Her name is Myrtle Young.

Among the funniest moments on the Johnny Carson show was when Myrtle appeared on the Late Night Show in the late 1980s. She was showing Johnny her potato chip collection. Some of them resembled dogs, ducks, one was a sleeping bird, there was a candle, Yogi Bear was another one, and then she leaned over to talk to Ed McMahon (Johnny’s sidekick). While she was talking to Ed, Johnny gets a little hungry and decides to grab a chip which was in a bowl under his desk and “crunch!” He eats it!” Myrtle had a near-heart attack as she thought that Johnny had grabbed one of her prized collection chips!

Myrtle was so entertaining and such a good sport, but seeing the reaction on Johnny’s face when Myrtle spins around giving him “the look” was just priceless.

Mention potato chips, and Waynedale’s Myrtle Young will tell you her prized possessions have seen more than the foil on the inside of a bag of chips.

Myrtle is a former potato chip inspector for Seyfert Foods in Fort Wayne. She is proud to show you her collection of chips resembling fruit, animals, cartoon characters, and even profiles of famous celebrities.

“My most famous chip,” Myrtle said with excitement, “is my Bob Hope chip. He sits on cotton in a special case with a lid on it to protect him from any kind of damage. This is my favorite chip and I don’t think that I could ever find another one like it.”

Young’s collection also includes chips that look like George Bush, Rodney Dangerfield, Yogi Bear, Mr. Magoo, Mickey Mouse, Tweety Bird, Ziggy and Moby Dick. Mrytle said, “I used to have a chip that resembled Alfred Hitchcock, but it had a little accident. It broke into a million pieces.”

Myrtle said that she began collecting these precious chips just to show her granddaughter, who had the idea of starting this collection. “I really got serious about my collection in 1987. That’s when I started traveling and showing them to people like Johnny Carson, Lady Di, and Prince Charles,” she said. “My chips have been all over the world.”

On one of her trips to Oklahoma City, the producers of a television show there insured her chip collection for $1 million, Young said.

This 86-year old lady had quite a tour over her time, but hasn’t traveled for a few years due to health problems, but she still enjoys showing her prize collection to people in the area. Myrtle said that her potato chip collection is the only one in the world. It is such a rare collection that Ripley’s “Believe It Or Not” has their eyes on it.