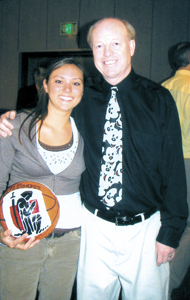 This is my story about Vini Dawson, who plays college basketball for the University of St. Francis Cougars. It is a story of her early years at Bishop Luers’ Junior High AAU Development Program.

Vini’s story is a “feel-good” story, that all hard working Americans will love!

Upon first watching Lavinia “Vini” Dawson at the 6th grade level with St. Joe’s Lady Panthers, our Bishop Luers’  coaches were not overly impressed. Though certainly an athlete, she deemed to possess average athletic skills. She was an average size guard, with average speed and quickness, and not a lot of vertical leap. Her basketball skills were not very polished, but what kid’s skills are at this age?

Still, there was no question that we coaches were going to ask her for our Bishop Luers’ AAU team. We could see some potential in this kid from St. Joe St. Elizabeth parish.

But we could see potential in a lot of others as well. Kids like Katie Quickery, Tayla Chevron, Erica Giese, Krista Leffers, Paige Magley, Shelly Rumschlag, Laura Till, Dawn Sorg, Kari Toll, Kelsey Helmuth, and Vini’s running mate at St. Joe, Lyndsay Sluter. Most of our LJB (Luers Jr. High basketball) groups of future Luers’ players get along great. But this class was especially a close knit group. The bond was fantastic-all for one, one for all. Although there was no Stefanie Gerardot-type (single standout) in this year’s group, the potential for BL Hoopsters was considered strong.

Vini was starting to really love basketball. She was certainly improving each year, but unfortunately not improving nearly as fast as some of her teammates. So after our D-1 Spiece Team Camp success, we had our final fun “bring your uniform back” practice complete with pizza, ice cream cake and special basketball contests. Knowing Vini’s love for the sport, I decided to have a little 1-on-1 talk with her.

I said, “Vini, I’ve got something that I need to tell you. Honey, if we had the freshmen girl’s tryouts tomorrow, ahhhh, I don’t know if you would make it.”

I lied. She definitely would not have made it.

“But Vini,” I said, “This is mid-June. Tryouts are not until mid-October. You have a lot of time to really work on your game!”

My intentions were not to upset her, but to motivate her. Did it work? I couldn’t tell.

Soon, I started hearing rumors that summer about Vini dribbling a ball while jogging down the street, through Glenbrook Mall, and just about everywhere else!

While on the JV team, during her sophomore year, Vini’s strong work ethic impressed both JV Head Coach Denny Renier and Head Varsity Coach Teri Rosinski. She advanced up to the Luers’ Varsity team for the IHSAA tournament run. The team was led by junior Stefanie Gerardot (future All-State player and top player in the regular season) and senior Jessica Hathaway (top player in the post season). Thanks to Jessica’s incredible 18-foot buzzer beater over S.B. Washington at the Warsaw Semi-State, the Lady Knights got back to the 2004 State Title game. And though the Lady Knights lost to Brebeuf Jesuit in the final game, Vini thought this experience “was the coolest thing in the world!” Even though Vini wasn’t used for much more than a practice player, she still had a great time.

As a junior, Vini made varsity full-time but saw very little playing time — Luers was blessed with a loaded and talented Senior Class. That year the Class of 2005 had a 22-3 season and reached the Regional Final game.

Vini kept on perfecting her game over the summer.

This fantastic young lady is one of a kind! I love her dearly. Vini is so very special to me, and always will be! And I’m not alone. Coaches, teammates, classmates and parents alike all love Vini Dawson. This is a hard working young lady. She even works hard OFF the court, as well!

She has been employed at Orchard Ridge Country Club for 9 years. At this writing, she actually has 2 jobs for the summer! Plus, Vini is truly a WONDERFUL young lady who is very close to the Lord.

And hoopin’ it up is still her passion during her free time.

Everyone was hoping Vini would break through in her Senior season. The team looked to be young and inexperienced. Vini was the lone senior. How ironic is that! All these girls considered to be better than Vini way back in 8th grade had dropped out. Though disappointed in her classmates giving up the sport, she still couldn’t wait for basketball to start.

Come basketball season, she wasn’t a starter. Luers had a “kiddie corp” of sophomores who could really play! Amanda Pedro, Markee Martin, and Amber Gottfried, just to name a few. Then add a super-trio of freshmen. Kelsey Wyss, Megan Pedro and Mary Hathaway who all got significant playing time. Kelsey and Megan started. Vini never complained about her spot minutes. It really wasn’t clicking for her. She HAD to be disappointed. But she never gave up. Just kept working harder. Nose to the grindstone. Vini always put her team first. Always! Then around mid-season, her play started improving. It came together for her. She always was this team’s best outside shooter. Her jump shot was smooth and solid. Her shot fake was absolutely awesome! But now, Vini seemed to be doing it all. Her ball handling improved even more. Her passes were sharp and well-timed. She got more steals. Her team “D” got better. She was the needed catalyst to an unbelievable 17-game winning streak. Vini was now the starting “2” guard (shooting guard) on a good team that desperately needed her outside touch!

The team’s confidence was extremely high entering sectional. We were constantly winning nail biters, so this young team actually had an edge in close game experience. Amanda Pedro hit arguably the most important shot in Luers’ Lady Knights rich history by hitting a 17-foot jumper near the buzzer to edge Concordia 49-48 in the Sectional Championship game. Vini’s second half shooting heroics led the Knights to a huge upset over S. B. Washington—a team with 3 committed D-1 college players —in Semi-State 56-49. But it would be on the state’s biggest stage that Vini Dawson would shine the brightest! At the 2006 State Championship game at Conseco Fieldhouse, Bishop Luers would have the best start in the state finals game of all the 5 state title wins.

Vini would lead the way early, bombing 2 downtown 3-pointers in the first quarter. Luers exploded out of the blocks with a first quarter 24-10 margin. Overall, Vini knocked down 10 of those points on 4 of 5 shooting.

Evansville understandably clamped down on the pretty little sharpshooter, after that. But Vini is the consummate team player. She simply just fed teammates like Amanda in the post and Kelsey on the wing for assists. Vini finished with 14 points, including a fast break stop-and-pop jump shot off the glass to essentially seal the deal late in the game.

And now IHSAA State Champion! Vini, the girl who almost didn’t make the freshman team 4 years earlier. The girl who wouldn’t quit on her dream! The one with the most perserverance. The hardest worker, and now a STATE  Champion!

You know, good things DO come to those who………..Work!

Writers note: Vini has continued her fine basketball career at the University of St. Francis. She had an excellent 2009 Junior season, with increased playing time and solid play throughout the year. She even started some late season games. Then, after red-shirting last season, Vini will be a 5th year Senior for legendary coach Gary Andrew’s USF team this upcoming Fall season.