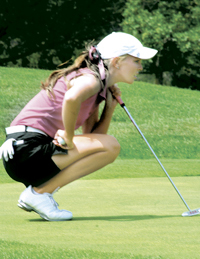 Waynedales’s own Kristi O’Brien won her first Fort Wayne Women’s City Golf Tournament last week in record fashion. Her 10 shot margin of victory indicates a total blowout. But for the first 2 1/2 rounds out of the 3 round 54-hole tourney, it was anything but.

On Saturday, July 17, 2010 this little St. Therese/Bishop Luers’ grad struggled out of the gate with her driver, and her nerves, over the first 7 holes. Her drives missed every fairway until the 7th hole, but her short game saved her time and again. Kristi’s 1 over par status through 7 could have been much worse. Then on the tough par 3 eighth hole, she hit a beautiful 6 iron right over the top of the flag, spinning back to about 12 feet. She then trickled her treacherous downhiller to the edge of the cup. The ball stopped dead on the lip, seemed to look down into the hole, then decided to fall in! That 1st birdie got her back to even par.

Kristi and Amber played all 3 rounds paired together. Kristi enjoys playing with Amber. She used to play in tourneys with Kristi’s older brother, Richie (age 32) back in their junior golf days. Amber, a former Ohio State star, is a great person and so much fun to play with!

Day 2 was totally different on the front nine for Kris. Again, she never hit a fairway until #7. She had 1 bird and 1 bogey through #3. It was her driver that was keeping her in constant trouble! After bogeying 4, Kristi had tons of trouble on 5, having to sink a 12-foot putt to save double bogey. Another bogey on hole 6 made it 4 over par in the last 3 holes!

She did birdie #9 for a 3-over par 40. Kristi, showing signs of righting the ship, took her driver and found the fairway her last 2 swings. She would then hit 6 out of 7 fairways on the back 9.

After parring the 1st 4 holes, Kris nailed birdies on 3 of the last 5!

Her 33 on the back would include only 14 putts, fantastic iron shots and no bogeys.

Her birdie save from the trap on 18 was key.

Megan, with still a 2 shot lead on #18 teebox, bogeyed the hole.

Both shot even par 73, and were now tied again.

Amber’s 75 would keep her in 3rd place, but now 5 shots behind the blistering two day 5 under par pace set by Kristi and Megan.

Megan Kiley was playing great golf. I was impressed by her vast improvement since high school. But I felt that Kristi would have one advantage in the final round. Kristi has always had a knack for winning golf tournaments, especially in close battles. In her last 3 years at Bishop Luers, she played in 25 total tournaments, and won 11 of them! That is a remarkable 44% winning percentage against fields of usually 35 to 60 golfers! At IUPUI, her first 3 top 10 finishes in college were all wins!

In the first couple holes of the final round, Kristi was again punching out of trees after an errant drive. After a routine par on #1, something happened that would instantly relax her for the rest of the day. She faced a treacherously slick downhill chip nestled down in the rough over #2 green, with very little green to the hole. Her caddie, Ben Moster (IUPUI senior) reminded Kristi that she had been practicing that type of chip alot lately, so “just trust it.” With 2 local TV cameras rolling, she chipped it perfect. It trickled down into the cup for a fabulous birdie! Journal Gazette reporter Steve Warden, told me later that he thought that was the key shot of the City Tournament, turning a potential bogey into an unlikely birdie! I agree.

She promptly sunk a 10-foot birdie on the next hole. Megan Kiley, one tough competitor, caught Kristi with a bird on #7, evening the match again.

Both were 2 under for the day, and effectively distanced themselves from the field, making this a 2-girl race.

Plus Megan made it clear that she wasn’t going away!

Kristi immediately responded with a 7-foot birdie putt on the 8th hole, after an awesome 7-iron.

Megan bogeyed, and all of a sudden, Kristi had taken a 2-shot lead.

Megan shot 2 under par on the front, and lost 2 strokes!

The crowd following the top group was huge in both the final 2 days. And they were getting a real show. Little did anyone know though, what fireworks still lay ahead.

After pars on the 1st three back nine holes, the lead was up to 4. But Kristi was in an absolute zone with her irons, her putter and now even her driver. She had been hitting her irons magnificently for weeks. Her distance control was impeccable. And her direction often matched it, hitting many of them stiff! But this final back 9 took her stellar play to a whole new level! After hitting her approach shot to 5 foot on #12, she stuck it to 3 foot on 13. After a smart iron tee shot right at the #14 flag, it left her an uphill 15-footer for an easy 2-putt par.

Amber Seiber held the single round record of 66, back in the mid 90s. It was about this time she told Kristi, “I hope you break my record.”

Kristi had 9 birdies and no bogeys in a spectacular round of 64!

She hit 17 of 18 greens, chipping in on #2 – the only green she missed in regulation. She took only 26 putts on the greens, without a 3-putt. In the last 28 holes of this prestigious Women’s City Golf Championship, Kristi had 13 birdies without a bogey! Her 3-day back nine scores were 33-33-31. And Brookwood moved some tees back for the 2nd and 3rd round. She broke Amber’s single round record, and set a new tournament low record of 205!

Kristi also won the top putter award, needing only 81 putts for the 3 days. The 2nd place lady with low putts had 90.

Pro Bob Kruse, Kristi’s swing coach since about 12 years old, told her after she fashioned a 68 on Day One, “Play the course, not your competitors.”

She heeded the advice.

She focused on nothing but the next hole, next shot. She “stayed in the moment.” She said that, “I did that very well. It worked out great!”

And make no mistake about this. Megan never gave up. In fact, she birdied 2 of the last 3 holes to secure the runner-up trophy.

Kristi just went crazy on her out there! In fact, Megan’s 215 total would have won last years tourney by 4 shots!

No one knows how hard Kristi has worked on her game in the past year. I’m talking 5 to 6 hours of hard work — every day — 6 and 7 days a week. No kidding. And she practices with a purpose, to improve on something every day! Low draws, high draws, low fades, high fades, etc. You don’t shoot 14 under par in a big golf tourney — including a course record of 64–by accident!

She worked hard in high school, but nothing like this. Her work ethic is phenomenal! She’s pleased because she has seen the fruits of her labor in recent summer tourneys. But she’s back to work. Nose-to-the-grindstone.

CONGRATULATIONS on your big win Sweetheart!