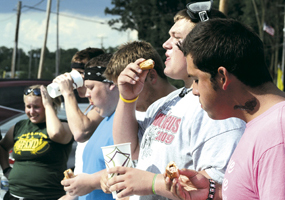 There weren’t any Joey Chestnuts around, but The Stand’s first chili dog challenge drew over a dozen contestants, stretching their stomachs on Saturday, July 17th.

From the look of The Stand’s participants, there were no try-outs to be a finalist. One just had to be willing to chow down as many chili dogs as possible in 10 minutes.

I asked a few of the Luers Football players what they did to prepare for this event. The comments were: “3 hot dogs in 5 minutes.” “I wore pink.” “Drink a lot of water.” “I’ve been preparing my whole life.”

As the temperatures rose to around 95 degrees in Waynedale, the first heat for The Stand’s contest began.

Co-owners, Mike Palmer and Skip Sandels set the table. One tray of chili dogs, a large glass of water, and… a bucket if you need it.

As the first tray of chili dogs hit the table, Allison Egts looked down and wondered what she had gotten herself into. But it was a great showing for Allison, she ate 9 chili dogs. One passerbyer commented, “I wouldn’t want to take her out—to eat!”

After the first round of three contestants there were only 2 eaters left. Allison and Timmy K. who ate 7. David B. used his bucket and was disqualified.

The second heat was up. There were football players from Luers competing. And even The Waynedale News’ owner / co-publisher Alex Cornwell competed.

Taking that first bite it was a thumbs up and the race was on.

You could hear Luers’ Coach Egts cheering on the contestants saying, “Come on Tyler Green! Put it in the end zone!” “You can’t turn green ‘cause your last name is Green!”

Was this the Luers’ training table?

Coach Lou yells out to the third heat contestants, “All the way to the goal line!” “Don’t hit the wall!” “Keep going Colten! Dog them dogs, boy!”

Also competing in the third heat was Andrew Lane. This big eater with the double-fisted action didn’t have the show he hoped for at this year’s competitive eating contest. But look out next year.

Colten received a trophy for his eating efforts and a gift certificate to The Stand in the amount of $100. Second place went to Dan E. and third place was Andrew Lane, who also received trophies.

This Major League Eating contest was sponsored by The Stand, Lon-Star Creative Art & Design and The Waynedale News.

During the event everyone was welcomed to cheer on the contestants and order up their own chili dog, fries and a drink if they wanted. Entertainment was provided by three graduates of Bishop Luers High School, Hannah Schindler, Tommy Saul, and Evan Stuerzenberger. This band is available for backyard gigs.
Give them a call at 494-4855.