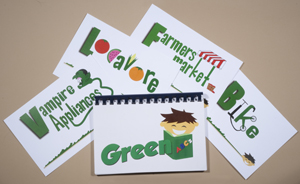 The Green ABC’s has two objectives. The first is to get kids reading. And the second is to get them reading about all things green.

“In 2008 when I created the Green ABC’s I wanted to find a fun and exciting way for kids – of all ages- to learn about green living. That’s how the Green ABC’s Flash Card System came to be!”

April Brewster Smythe founded the Waynedale Green Alliance in late 2007, and at the same time began the creation of the Green ABC’s. In 2009 her son, Christopher Langschied became her business partner and they organized the GreenFEST in that year which took place with a partnership with the Southwest Conservation Club.

During this time, Smythe had been writing nationally published articles about all aspects of green living, talked to experts from California, the United Kingdom, and right here in Indiana, where there is an abundance of great knowledge.

In late 2009, Steve Franks from the Northeast Indiana Innovation Center heard about the Green ABC’s from IPFW colleague, Debra Barrick. He contacted Smythe and the art of pinpointing the proper initial offering of the Green ABC’s began. This project was nudged along with the help of an Entrepreneurial Grant funded by the Northeast Indiana Innovation Center. A partnership with Fort Wayne Community School’s Anthis Career Center also was significant supporting factor in the initial start-up of the Green ABC’s. The student there, under the tutelage of Karen Gillie and Nikki Craig designed graphics to illuminate the key concepts and terms. Their web department also designed a website and web applications for the project.

The Green ABC’s launched on April 21, 2010 with a business press conference at the Northeast Indiana Innovation Center.

And, on June 14, 2010, the Green ABC’s was awarded a 2010 Green Innovation Award by the Northeast Indiana Green Builders Coalition. This award seeks to highlight green innovators in our community who are bringing sustainable knowledge to our area. We stood along with the City of Fort Wayne, and Fort Wayne Metals as contributors to this important work.

Now, the Green ABC’s has a unique product offering that can help kids of all ages learning and having fun with a wide variety of green living ideas. Starting with A for Alternative Transportation all the way to Z for Zero Waste, the Green ABC’s hosts a journey through alphabetical learning in the Green ABC’s Flash Card Set!

For further information about the Green ABC’s and to find out how to purchase a set for your family or to set up a larger project for your church, school or community groups – call 260- 247-2520 and talk to Chris or April –or visit our website at www.greenabcs.com/ The Green ABC’s is on FACEBOOK and Twitter. The Green ABC’s is looking forward to standing shoulder to shoulder with you and yours to help our world go green-one letter at a time.