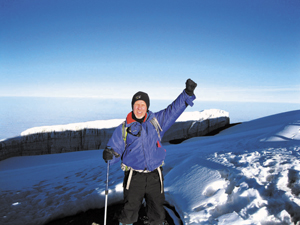 In June 2010 Dr. Tom Blake left his downtown Waynedale dental practice for a two week vacation to begin a journey that would take him to Tanzania, Africa to climb Mount Kilimanjaro. At 19,336 feet, Kilimanjaro is the highest mountain in Africa and one of the highest volcanoes in the world.

”It is the world’s tallest walkable mountain, and what a walk it is!” exclaimed Blake.

Blake said he had always wanted to go to Africa. And, it just happened that one day while working out at the gym a friend asked him if he was interested in climbing Mount Kilimanjaro. He went home elated, asked his wife Christy if she was interested, but she said she had no desire, thanks, you go. As time went by and the trip got closer his friend from the gym became ill and couldn’t pursue the trip either.

In preparation for this unforgettable experience, he worked out at the gym and spent hours upon hours on the stairmaster. “There really is no preparing for altitude around here,” said Blake.

His only experience climbing was when he was an Eagle Scout.

After arriving in Moshi, Tanzania Dr. Blake traveled 20 minutes to the lodge and met up with other hikers who would also be climbing Kilimanjaro. Small world that it is, his roommate was from Jasper, Indiana.

Mountain guide for this climb was Dean Cardinale, one of the world’s top mountain guides, who had actually climbed Mt. Everest a few years ago.

The least difficult routes for this trek are Marangu and Rongai; the more difficult are Machame, Shira and Limosho.

To begin their trek up the mountain they hiked rocky muddy paths through a rainforest with huge Ficus trees and “ferns taller than oak trees!” It was a tough route up the first day with  temperatures in the mid to high 70’s, but spectacular scenery.

From rainforest to alpine desert, each day was extremely varied as the climbers passed through 5 climatic zones en route to the summit.

They spent from 8 to 15 hours per day climbing.

A team of 60 additional people made the trip. They were the porters. Helping you through everything, the porters would tell you when to eat, drink, slow down and rest. They carried each climbers gear up the mountain, cooked meals, set up and broke down camp and kept everyone going with their entertaining songs to lift the spirits after an arduous day of climbing.

There were plenty of rest stops, allowing many opportunities to “fill ‘n flush” as Dr. Blake called it. Dehydration is a danger at this altitude, so 4-5 liters of water was consumed each day. The climbers also took a drug called Diamox (high altitude medicine) to help increase their respiratory rate as they climbed but it also made bathroom breaks a necessity.

“I never really felt the AMS (Acute Mountain Sickness),” said Blake. “I kept on top of it…I used Diamox for the altitude and Ibuprofen for headaches.”

After traversing the mountain high in the mornings they descended to camp in the evenings, with two people sleeping in 3-man tents.

As the group continued ever higher, breathing became a bit more difficult. Each hard-earned breath contained only half the oxygen as when you were at sea level said Blake. “But as the porter’s would say, “Pole, Pole,” which means slowly, slowly in Swahili, we made it into camp.”

The most important day on the mountain started out in darkness, at midnight, to make the final ascent to the top of Mount Kilimanjaro, the highest point on the continent of Africa.

“Summit Day was the longest and most grueling. It was just a long, long, long, day,” said Blake. “We started out at midnight to go up with freezing temps requiring ski hats, gloves and gaiters … and at around 3pm we reached summit.”

“We celebrated at the top by having Ginger tea. It was so delicious!”

“I must say that the hardest part of the climb was the descent, going down that unforgiving mountain. It took 1½ days to get down and with the scree (a loose rock, gravel and sand mix) there was no foothold. I fell. My thighs were burning from the 6-hour trek downhill all the way!”

In reflecting on his 60-mile climb, Blake said, “The time on Mount Kilamanjaro is something I will never forget.”

When asked if he had plans to climb another mountain, he said, “I never thought I would say this, but, YES!”