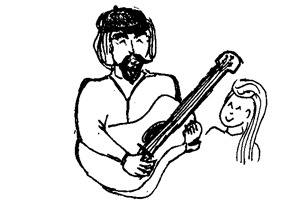 Continued from the Jan. 29th issue

Heather’s daddy thought about it and decided to let Heather buy the old guitar. “What would it hurt? The child is taken with it. But to fix it, that’s another thing,” he thought. The next day they returned to the music store only to find that the guitar was gone! Heather was heartbroken. Someone else had taken it she thought. They did go in and inquired of the owner about the broken guitar.

“Oh, over there,” snorted the owner.

Heather rushed to the trash container and retrieved the old guitar that she held lovingly in her arms.

“How much mister owner?” she asked.

Heather was overjoyed but her father thought she was crazy! Anyway there was no charge so what could it hurt?

The next day Heather took the broken guitar to Giuseppe.

“Can you fix my guitar?” she asked.

Old Giuseppe looked at the mess, scratched his chin, then scratched his head and replied, “Well, I don’t know little one…but I could try. I’ve never repaired a guitar before and in those days they had special wood and glue. I’m not sure the front would hold with the pressure of the strings…but, I’ll try.”

Well try he did. It took weeks to repair the old guitar. Finally the day came when Heather went to Giuseppe to play on her guitar.

“I did the best I could,” said the old master violinmaker.

Heather took the old guitar in her hands. How beautiful it looked and you couldn’t even see the cracks! She sat down on a stool, took the instrument gently into her arms and plucked the first notes. They were beautiful, so melodious, warm and inviting.

Giuseppe said, “As I was repairing it, I noticed a signature inside. It was made by the famous guitar maker Di Sorrento and it’s almost two hundred years old!”

Heather was so pleased. She loved the guitar. On the back of the instrument in small letters she saw words “Mario Di Guardino.” The old violinmaker knew Mario Di Guardino was a famous guitarist so he contacted him about the restored guitar. When Mario found his beloved Christopher was repaired, he came immediately to Heather’s home. How excited Heather was.

But could she play well enough for this famous man?

Mario came and listened to Heather play on his Christopher.

“You have great talent little lady” said Di Guardino. “I would encourage you to continue your studies. And as for Christopher, I’m glad you found him and I want you to keep him,” added Mario.

And then he left. The famous Mario had come to see Heather and encourage her!

Heather did continue her studies and went on to also become a world famous guitarist. By the way, she called her guitar “Christopher.”