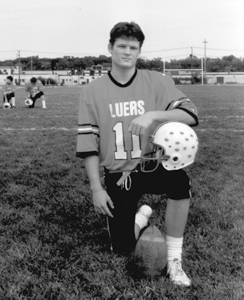 Minnick replaces legendary Coach Bob MacDougall, who resigned on December 1 after coaching the Wolves for six seasons. Minnick and MacDougall aren’t strangers. MacDougall compiled a 48-17 record at JJC. Minnick played two years (1986-87) as a quarterback for MacDougall at DuPage before becoming a Chaparrals Assistant for seven years (1991-97).

Tom Minnick believes he is up to the challenge. So do some very important people at Joliet Junior College, the nation’s oldest junior college. Minnick was the Wolves’ defensive line coach in 2001 when they won the non-scholarship national championship. The former Bishop Luers High School quarterback held the same position for JJC when it posted the school’s only perfect record (11-0) and claimed the overall NJCAA national title in 2002.

Minnick, who began coaching at JJC in 1998 for then-Coach Matt Kalb, also has coached JJC receivers, quarterbacks and running backs.

“I learned so much from Coach MacDougall,” said Minnick, who has been a JJC athletic specialist/admissions recruiter. “Probably one of the first things I learned from Bob was about loyalty. He was tremendously loyal to his coaching staff.

“Secondly, Bob taught me about telling the truth to recruits. He recruited me out of high school. I saw how honest and up front he was to recruits the last 14 or 15 years. He was always so honest with his recruiting techniques and never downgraded another program or an opposing coach during that process.”

Minnick quarterbacked Bishop Luers to the 1985 Indiana 2A State Championship. After playing two seasons at DuPage, he transferred to Division II Missouri-Rolla where he played two years at quarterback.

He graduated from Missouri-Rolla with a degree in business and economics.

“Tom has put in his time and now he will get the opportunity to make the final choices and decisions,” JJC Athletics Director Wayne King said. “He has coached here for eight years and done a good job. Tom learned from one of the best coaches in Bob MacDougall. We’re more than happy to give him the opportunity to be the head coach at Joliet Junior College.

“Fourteen-hour work days are nothing new to Minnick.

“Tom Minnick is an excellent choice to be the football coach here at JJC,” MacDougall said. “He knows that the days throughout the season, and that includes recruiting times in winter and spring, are often endless. He’ll be very dedicated to this.”

Minnick already has hit the recruiting trail for the Wolves, who finished 6-6 and played in a bowl game last month. JJC returns 14 regulars.

Minnick, a three-sport athlete at Bishop Luers, knows that recruiting and having a competent coaching staff at this level are top priorities.

“I think we return a pretty good nucleus … good enough to win,” he said. “Right now, it looks like we could return between 25 and 30 players.”

Recruiting local talent is a top priority for Minnick, who is married to JJC Cheerleading Coach Tiffany Minnick.

“When we won the overall national championship in 2002, we had a decent amount of local talent on that team,” he said. “We want to keep a positive working relationship with area high school coaches.

“We have the ability to give student-athletes a quality education and two years of playing experience. We are always looking to get our players scholarships to four-year schools.”

“The MFC is regarded as the nation’s top junior college football conference,” Minnick said. “Two teams from our conference, Joliet in 2002 and Grand Rapids this year, have played for the overall national championship.

“That speaks volumes for our league.”