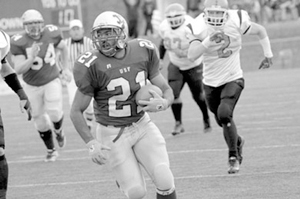 Where was that top ranked quarterback from Morningside College on Saturday?‑Did anyone see him at the game, because the Cougar’s defense completely shut him down in the NAIA semi-final game that was played at D’Arcy Stadium on Saturday, December 3?‑The Cougars finished off the Mustangs with a 42 to 14 win.‑This win paved the way to head south for the winter, or at least a weekend on December 17th.‑

The Cougars will face the toughest challenge of the season as they face the defending national champions the Carroll College Saints who are also undefeated, for the third year in a row and second year in a row at the NAIA National Championship game.‑This is the rematch that all of University of St. Francis was waiting for, time for redemption.‑

Saturday’s game was looking like one of the best games of the season coming into the game.‑Morningside College from Iowa was ranked #3 in the country and undefeated, and had a #1 ranked offense until they came to Fort Wayne, IN.‑Their quarterback, Craig Fobbe, who broke many NAIA records this season, faced the toughest defense that he would face all year.‑Fobbe was held to only 242 yards in this game, when he averages 386.9 yards per game.‑Paul Carter and Clarence Ellington had the two interceptions this past Saturday that simply finished off Fobbe and Morningside.‑I’m sure that Fobbe will never want to come back to USF ever again, especially since USF beat his team last year with a score of 55 to 3.‑He probably never wants to face another defense like USF’s ever again.‑

Our defense came to play on Saturday, but so did our offense.‑The Cougars offense earned 514 total offensive yards in this game.‑Chris Bramell, the USF QB, led USF with 96 yards rushing, and 189 yards through the air.‑Did anyone else see Bramell carry a bunch of Morningside players down the field with him as he ran the ball?‑But let’s not forget about Adam Denning who had 3 touchdowns, Cory Jacquay and Mike Ledo (Bishop Luers) who ran and caught the ball like crazy on Saturday.‑How about that offensive line on Saturday?‑The Cougars were just dominating the whole game.‑‑

If you are interested seeing the Cougars play for the National Championship game in tiny Savannah, TN on December 17, 2005, talk with the SAC guy, Chad Edwards.‑Last year’s National Title game was an amazing game that was very exciting and well worth the trip down there.‑But there was one difference between last year and this year. This year we’re back in the title game with a vengeance and we’re bringing home a championship trophy! Let’s finish off these Saints from Carroll! GO COUGARS!