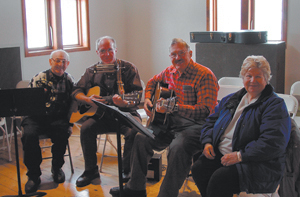 Founded by the immigrants who came to America, ethnic groups were a part of nearly every town and neighborhood. The clubs were dens of familiarity and nostalgia. On the evenings and weekends the new arrivals would get together to speak their language, eat comfort foods and share their song and traditions.

The one that keeps going strong are the German clubs.

Carol Mauch and Herman Quake recently invited me to take part in one of the club’s favorite celebrations.

“Do you like brats?” they asked. “You must come to our Schlachtfest.” Giving directions, Carol said, “Come down Ardmore Avenue heading north, when you near Elmhurst High School look for a road called Elmhurst Drive on your right.” “Take that road as far as you can and in front of you will be a sign saying Park Edelweiss. Take a right. You will see a big white German-style barn. That’s us. We’ll be in the rathskeller redecorating and upstairs they will be making brats.”

Sure enough last Saturday I found the home of the Fort Wayne Mannerchor/Damenchor and the German Heritage Society. Carol Mauch and Sally Quake were busy hanging pictures in their newly painted rathskeller. In the rathskeller, an informal dining room and bar, I depicted the German life preparing for a Schlachtfest.

A Schlachtfest is the celebration of the pig slaughter. On German farms, it was tradition to slaughter a pig. A butcher would visit the farm, butcher the hog and make sausage according to his recipe. The family, and often neighbors, would then get together to sample the meal.

The Fort Wayne Schlachtfest is one of the merriest parties ever, and so is the Saturday in preparation. As in the early days, members do the cooking and serving. A singers’ hall is an upstairs auditorium and doubles as a dance and dining hall. That is where I found Herman Quake and a bunch of merry men singing in German to the top of their lungs. Since the beginning of the club in 1869 they have been making their own sausage for Schlachtfest.

David Muehlenbruch, a 22-year veteran of sausage making for the German club, said that they had started their day early. The meat was first prepared by putting it through a grinder. “Sausage making is a continuous sequence of events,” said Quake. “Each step in the proper sequence is important to a good tasting brat.” The coarsely ground meat is kept as cold as possible during the grinding and mixing. A slurry of secret seasonings, spices and salt using water were added and thoroughly mixed in. “Unsless you have special eqweepment, it is best to work with small batches, around 25 pounds, so the cure and seasonin’ can be more evenly destributed,” added Renate Magin in her heavy German accent as she made huge meatballs. The sausage was then placed back into the grinder and packed very tight. Herman Quake began the process of grinding then was replaced by the President of German Fest Mark Critchfield. Used to form the shape of the brat is the casing. It comes packaged in a salt solution. But before stuffing the sausage inside, it is soaked in lukewarm water for at least 30 minutes. The hog casing material is placed on the end of the grinder and as the crank is turned out comes the long tube of sausage. This is where the “twiddlers” come into play. They twist the sausage into its proper length, which is about 6 to 8 inches, forming the bratwurst. The long twisted sausage is then placed on a table until ready for storage in the refrigerator.

The procedure of stuffing the sausage into the casing remains basically the same today as it was done in Germany years ago, but the sausage recipes have been greatly refined. This German group would not reveal their secret recipe but I can assure you it looked good. Come and share in song by Haus Kapelle (German house band), dance and tradition beginning at 6:30pm on Saturday, March 19, 2005. Diners will receive a homemade brat made fresh. Also crowding your plate will be a tangle of sauerkraut and a mountain of potatoes, served with vegetables and dessert. And of course, nothing washes it down better than a good, hearty German beer, your choice, Bitburter, Warsteiner, or Koestritzer.