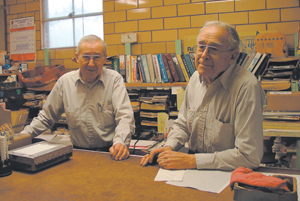 Waynedale Plumbing, 3025 Lower Huntington Road, began in 1943 when Charles B. Schmidt quit International Harvester Company. Charles opened a plumbing supply business in his garage one door east of where they are today.

He then brought in his brothers, Virgil and Earl. Howard and Lillie Hoke bank rolled the business for the three brothers on January 3, 1950.

The three brothers began selling bottled gas in the 1950s. Virgil and Earl were drafted into the Armed Services and Milroy Ploughe, of Waynedale Cleaners, was hired to fill the void. Homer said, “Milroy agreed to work 2 years but ended up staying 15.” Homer’s son, John, helped with the business off and on, and Howard Hoke (Earl’s son) joined the business in 1980. Today all three, Homer Virgil and Howard, keep busy, ordering new supplies, tracking inventory, and providing service to their many patrons.

When a person walks through the doors of Waynedale Plumbing it is like stepping back in time. One sees solid wooden desks and hundreds of wooden “pigeon holes” with every plumbing part and fitting known to mankind. The Hokes have managed to merge new products into their inventories without loosing the flavor and value of old time service and accountability.

Many of the local patrons remember Virgil’s cat Jessie. Jessie had a special basket over their desk. She passed away a few years ago. Virgil still claims that Jessie was not only the most cordial one in the shop, but was also the keystone to their business.

Many of the houses and businesses in our community were plumbed with parts that came from Waynedale Plumbing. With over a century of combined experience, Homer, Virgil and Howard have solved most every plumbing problem.

A local patron explains, “Price sensitive members of our community ask why I don’t buy my plumbing supplies at one of the local discount houses? My answer is always the same. Waynedale Plumbing has what I need and they know how to do the job! If I have to make more than one trip, the discount stores are not cheaper. Furthermore, I refuse to deal with a salesperson at a discount store who doesn’t know anymore about plumbing than a hog knows about Sunday.”

“Homer, Virgil and Howard sell me what I need instead of what I think I need and for that I am most grateful.”

Thanks Waynedale Plumbing for all the plumbing supplies and service you have provided to Waynedale since 1943. You are another jewel in the crown of jewels that make up our Waynedale business community.