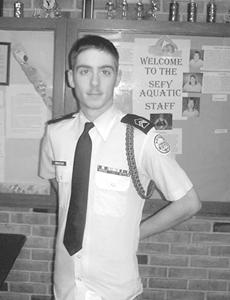 There is a reason that over 2,000 adults in Northeast Indiana volunteer countless hours, days, weekends, and weeks to be involved in the programs of the Boy Scouts of America. And it doesn’t involve large salaries or great prestige. It involves the development of our youth, and that in turn determines the future of our world.

In a flash memories come back and I have to stifle a laugh. He is standing there in front of me in‑a complete Scout uniform. His eyes are full of pride, hope, and perhaps even a little uncertainty. His uniform has been purchased to last for a few years. The Class A shirt billows and the belt could probably circle his waist twice.

He is just 11 years old and this is his first Leaders Conference. He begins to recite the Pledge of Allegiance, but then fumbles with nervousness. Standing in front of me at his first conference he knows that he is on the spot. And he knows the Pledge, but somehow he just can’t keep it straight. There is a little panic as his eyes meet mine. But those eyes ask, can I still belong? Can I still go camping, play games, learn the skills, and can I still be one of the Scouts in the Troop? Reassurance comes rapidly as he is welcomed into the Unit.

Knots are tied again and again. Then twisted around sticks and poles and equipment is stowed away in trucks. Some sticks are lashed together to make a rickety tripod that suspends a water jug precariously. It might be a useful “camp gadget” to make access to the water more convenient. But as he walks away he doesn’t see a teetering tripod over his shoulder. Instead it could be the Eiffel Tower.

Then he is at the Waterfront. His arms and legs are skinny and it is hard to tell from his flailing whether he is swimming or attempting to empty the lake. His forward progress slows and he might even be trying to sink (he doesn’t yet possess enough body fat to float!). Will he make the 100 yards required to be classified as a Scout Swimmer? That coveted skill level which opens the door to Waterfront adventure and activities. The strokes get slower, but he doesn’t give up. He makes it! And I am as excited as he is tired.

Cool night air invades my sleeping bag. And every little rock or stick reminds me that I am on the ground in my tent. Every adjustment that I make just lets in more of that brisk air. Then there is a scratching on the tent door. I can hardly hear it, but it is there. And so is that Scout. Possibly shivering in the cold, or maybe shaking from waking the Scoutmaster at 0 dark thirty.

“I don’t feel well,” he complains. A cup of hot chocolate, some friendly talk, praise, and reassurance (along with reorganizing his sleeping bag), and he is asleep for the night in his tent. We all sleep the night away soundly.

Then he is standing in front of me again. And I still need to hold back a laugh. Now his uniform is attempting to choke him, the khaki shirt strains to cover broad shoulders, the trousers are held up by a belt that is almost too short. Across his chest is his merit badge sash with rows of badges that represent skills learned and knowledge acquired. When his eyes meet mine this time I see in them the familiarity that shared experiences bring. His face now shows pride, confidence, leadership, and accomplishment.

“Do you think that I am ready for my Eagle Board of Review?” he asks, giving me that firm left hand Scout handshake.

As I watch him turn to go‑I think, there goes my boy.

But he is not my son. His parents only loan him to me occasionally. But he is still my boy.

Stephen (directly above) and Randy (above left) – Thanks for all of the memories and experiences that we have shared.

This column is for you. It is also for all of the other Scouts and Leaders that have shared these same experiences and memories.