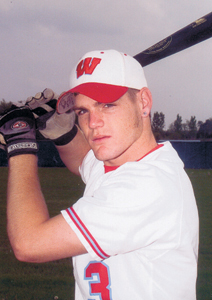 Craig Nyborg, from Wayne High School was one of two recipients for The Blanket Award. To receive The Blanket Award an athlete must letter at least 8 times. Craig has lettered in football, tennis, basketball and baseball.

Craig has also been selected to participate in the 29th Annual Indiana High School Baseball Coaches Association All-Star Series. As a freshman at Wayne, Craig batted .400 with 6 homeruns and finished out his senior year with 7 homeruns. His primary position is catcher but he was also used as a pitcher. Craig plans on attending Kishwaukee College (a prominent baseball program) in the fall.

Fifty players were selected by the IHSBCA membership and will play a three game series in Fort Wayne for the All-Star Series. The series will be played at Memorial Stadium on Saturday, July 12th (a double header) and at Indiana Tech on Sunday, July 13th (single game). Last year the North All-Star team won two of three when the series was played at Purdue University. Currently, the North leads the series with 44 wins to the South’s 37 wins.

The All-Star players will be the guest at the Hoosier Diamond/IHSBCA All-Star Recognition Banquet that will be held on Saturday evening, July 12th. Speaking at the banquet will be University of Notre Dame baseball coach, Paul Mainieri. A home run hitting contest will take place on Sunday before the final game.

Several members of the All-Star squads have been drafted by professional baseball clubs and many have been awarded college baseball scholarships.

Congratulations to Jared Tarney, son of Boyd and Kate Tarney. Jared made the honor role during his senior year at Bishop Dwenger High School.

His senior year he led his team with a batting average of .478, had 11 doubles, 4 triples, 3 home runs and 29 RBI’s. Jared is a left-hander who threw a no-hitter, had an ERA of 3.0 and 50 strike-outs. At Dwenger, he was voted MVP, won the Silver Bat Award, and held the highest batting average with the most runs scored.

The Masters and Queens is a scratch (no handicap) event of the Indiana State YABA (Youth American Bowling Alliance) Tournament.

As a sophomore at Bishop Luers High School last season, Angie had a high average for the girls in Fort Wayne with 194 and was 1st in SAC singles, 1st in team sectionals, 1st in single sectionals and was named MVP for her team and the Fort Wayne section. She also finished 4th in the Northeast Regional Singles and 5th in the Semi-state Singles.

Logan Edwards, a senior at Heritage High School, is the son of Roberta (Bell) Edwards and Harold Edwards. Roberta grew up in Waynedale on Spruce Drive and graduated from Elmhurst in the class of ’68.