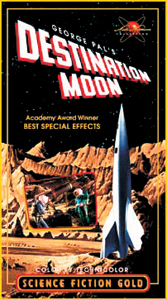 I know I am joining all of you in sadness over the catastrophe of our space shuttle, Colombia, and its seven astronauts. Whilst staying close to the TV for any news of recovery of pieces from the shuttle, my mind turned back as if I were in a time machine.

Waynedale——the free outside movies at Waynedale School. We gathered up blankets, chairs, popcorn and candy and went to eagerly wait for the movie. It was a kids “social event” as well, as I look back on it. When it got dark, some of the kids held hands. Risque in that time! I don’t remember whether we knew in advance what would be “showing” but I do remember my favorite: Destination Moon. In the movie the rocket takeoff brought kids to gasping. The faces of the astronauts drawn back, eyes in slits, with the corners of their lips stretched almost to their ears! That was my first exposure of what it would be like to leave the Earth at a high rate of speed. Of course it was just a movie, and it wasn’t possible to ever get to the moon. That’s what our gang of kids in Waynedale thought. The year was in the late 40’s or early 50’s.

When Alan Shepherd was launched into space it was thrilling. By that time, we had a TV set, and those who didn’t have TV’s were hunched around a neighbor’s TV to watch that most incredible gut-wrenching event. After that came a succession of astronauts. I watched the TV as John Glenn went around the world and safely landed in the ocean. I was horrified as Gus Grissom and his two colleagues were burned on the launch pad as the space ship caught fire. And then! The moon landing was the impossible dream that had come true! I was watching it during the night, along with most Americans, as Neil Armstrong first set foot on the moon, planted the American Flag, and spoke his now famous words: “One small step for man; one giant leap for mankind.” I watched as they jumped high in their space suits on the surface of the moon. It was astonishing and technology was moving so fast. It was as if we had entered a new age in our world.

I was watching as our manned spaceship exploded on takeoff and 7 of our astronauts were killed on the Challenger in 1986. I couldn’t help but wonder what their last thoughts were. What it would be like? I even wondered if maybe some of them were alive as they descended to Earth. It was a haunting thing.

Now, the horrible news of the loss of Columbia. Seven of the brightest and finest astronauts killed just minutes before landing. A lot of “talking heads” were on TV hour after hour, discussing whether we should send men and women into space and asking why we can’t use robots.

My great-great-great grandfather was a pioneer also. He traveled west on the Oregon Trail during the gold rush. He kept a diary, which I have a copy of, along with all my siblings. Should we have stopped going west, stopped continuing our knowledge and suppressing our passion for adventure, because so many died? My grandfather’s best friend got sick and three days later my grandfather buried him. So many died, but the adventure, the seeking, the curiosity went on. That’s what Americans do.

We must go on. We must keep pushing the frontiers, because Americans are that way. We can stay safe and take no risks for fear of dying, or we can boldly set out to do the things that capture our imagination. For that is truly living. I love the shots of those astronauts floating through the cabin and the looks on their faces tell us all that they are living their dreams.

Pioneers will always push on. It is not up to the “talking heads” on TV to decide what is and is not wisdom or foolishness. It is a personal decision that is made alone. There is one picture of Israel’s Astronaut Ilan Ramon floating through a door and arching his back and his face is towards the camera. His face is alight. He is in ecstasy. All of them were doing what they dreamed of doing. It IS possible to be at the top of the world!

That led me to thinking that we should all be pursuing what we dream. And to die whilst living that dream would be the greatest way to depart from our Earth. The families are like bedrock. They are grieving but all have said that the astronauts died doing what they loved. So, as we recover the tremendous loss of these incredible men and women, let us be inspired by them to live. Not to just exist, but to live!

Love to all of you,