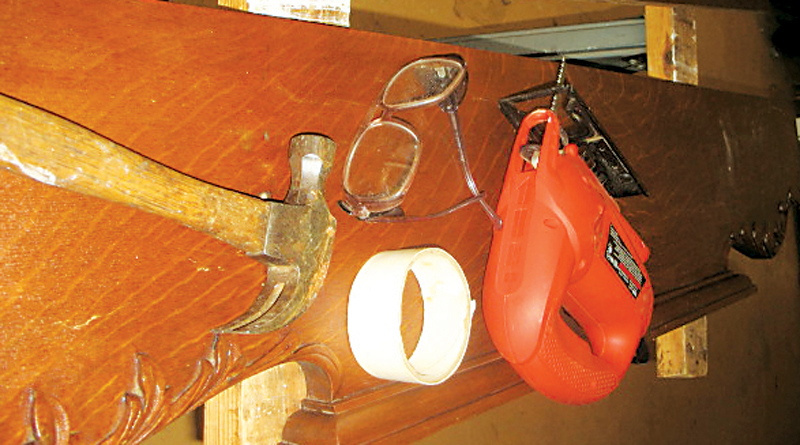 Well, obviously I do want to talk about it, or I wouldn’t be writing this article. But I’m just going to tell it once here and then I don’t want to discuss it any further.

As you may know, if you read the article I wrote last month, we moved – again! And in the midst of the myriad of stuff we came across a decorative board we thought would make an excellent fireplace mantel. It served as a shelf in our previous home. Once it may have been a headboard, a piece off of a cabinet or hutch; who knows. Marty got it at an auction.

Its length was perfect but it was a little too wide. So, I dutifully set up my sawhorses, got out my saber saw and fixed a wood blade in it, secured my protective goggles, found the masking tape and made ready to begin sawing the back end of the board where there appeared to be a hairline crack running the length of the wood.

Then she came out into the garage. Marty, that is, and said, “You’re going to put masking tape along where you’re cutting aren’t you so the wood doesn’t splinter?” I answered, “Of course, I was just getting ready to do that!” Then Marty said, “Wait a minute. I’ll bet you could just do a couple of taps with a hammer on the back end of the board where it’s already split and that piece would come right off. I think it’s just glued on.”

“Oh no, that won’t work,” I said. “Hitting it with a hammer would just cause it to splinter. I’m just going to begin slowly sawing …”

Wham! Marty hit the back end of the board with a hammer and … Splat! The back of the board fell off cleanly onto the garage floor.

After her laughter subsided somewhat I opened the door into the house and politely asked her to leave. But, I could still hear her cackling and chortling inside for several more minutes. Most of the morning, in fact.

I pride myself on being a good reader and speaker. I read for the sight impaired with the Allen County Public Library’s audio reading service, I serve as an announcer at concerts for the Fort Wayne Area Community Band and I proclaim Scripture readings at St. Therese Church. On one occasion many years ago, I was reading the prayer petitions in church and sternly said, “Let us pray for Pen-a-lope Martin who is in the hospital.”

When I returned to the pew and sat down next to Marty, she asked, “Let me see those petitions.” Then she whispered, “That’s Pe-nel-o-pe, not Pen-a-lope!” The snickering began, but since we were in church, she had to stifle it until Mass was over and we were outside.

I argued that the muskmelon variety is pronounced “can-ta-loupe” so it was only natural for me to say Pen-a-lope, but to no avail. Like I said, I don’t want to talk about it!

Finally, just so you know, it happens to other people, too. I worked with a colleague who didn’t get along with our boss very well. They met in the restroom on a Tuesday morning years ago after ABC first began televising Monday Night Football. There were three renowned broadcasters, now all deceased, serving for years on those telecasts: American Sports Journalist, Author and Broadcaster Howard Cosell, widely known for his blustery, often-pompous personality; laid-back Joseph “Dandy Don” Meredith, a former Dallas Cowboys quarterback, sports commentator and actor; and Frank Gifford, a past halfback and flanker for the New York Giants who served as the play-by-play announcer and commentator. But the boss couldn’t quite remember Gifford’s name and said to my work associate, “Wha-cha-think of that broadcasting team last night, especially Charlie Gifford. My colleague countered with “Who?” The boss then exclaimed, “What? You don’t know who Charlie Gifford is! Big sports enthusiast like you who follows all the games. Surely you should know who he is. He played for the Giants and is married to television personality Kathie Lee Gifford.”

“I guess it is Frank,” mumbled the boss as he hurriedly left the restroom, tossing a paper towel toward the wastebasket but missing the mark.