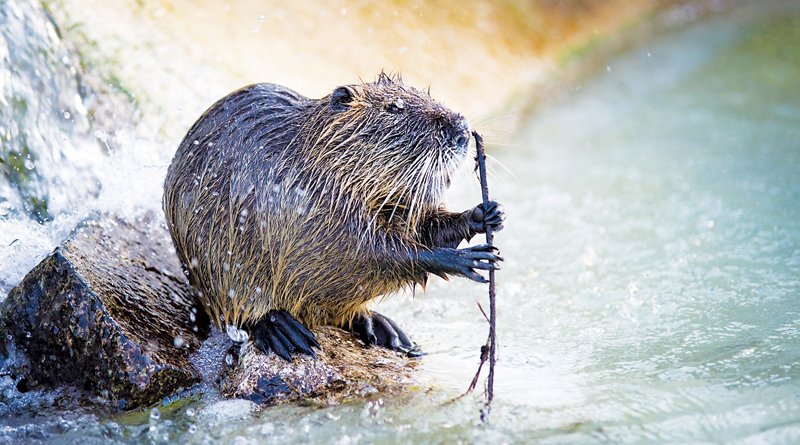 We have a new neighbor. One, maybe two, maybe more. Beavers have moved into the wetland at the end of our pasture. We haven’t seen them. Beavers are nocturnal. Only on rare occasions does a beaver venture out during the day. But by the cutting trees, they make it obvious as soon as beaver move into an area. If they stay, soon after they arrive there will likely be a dam and a lodge or, if there’s a stream, a large hole in the stream bank.

Our new neighbors haven’t made much sign yet, just a few cut saplings, no dam, no lodge, no hole in a bank. There’s no stream, therefore no bank to dig a hole in.

Settlers coming to North America found beavers from the Atlantic to the Pacific and from Mexico north, wherever there were deciduous trees. Beavers do not eat coniferous trees.

Early settlers were familiar with beavers. There were beavers across Europe and Asia, a different species though very similar to the beavers of Europe.

A beaver is a larger animal than many people think. An adult has a body up to two and a half feet long and a tail as much as another foot and a half long. It weighs sixty to eighty pounds. Its head and body are covered with thick, dark brown fur. Beaver skin was prized for men’s hats and were trapped extensively in America for their skins. They were also trapped because of the damage they did to streams, forests and farm land. They damned streams creating lakes and marshes. Their damns blocked water flow and boat traffic. Beavers cut trees and when the trees around their homes were reduced they dug ditches, then cut and floated logs to their homes.

A beaver’s home, a house they build of sticks and mud or dig in a bank, is a cavern, four to seven feet across and about a foot and a half high. Whether it’s in a house or tunneled in a bank, the entrance is always under water and the living space above. There are two entrances, a tunnel large enough for two beavers to pass and a second much more narrow tunnel used to escape a mink or other water predator.

A beaver’s front teeth are strong and sharp and they wear but wear slowly, and they never stop growing. They’re the chisels a beaver needs to cut trees, even large trees, as much as three and a half feet across at the base of the trunk, I read.

Other features of a beaver is large, broad, webbed hind feet, their paddles, and a broad, flat tail covered with scales, not fur. That tail, once thought to be used to carry mud to build a dam or house, is a rudder and a warning device. When a beaver sees or senses danger it slaps the water with its tail, making a loud splat, a warning to other beavers in the area, then it dives.

Beavers do not hibernate. In areas where ice covers water in winter, they store food for the season. They cut logs six, eight, ten feet long, drag them to water and float them to their lodges where they weight the logs with mud and stones, stacking them under water for winter dining.

Trapped for their skins, killed to prevent dam building and land flooding, and cutting trees, beavers are now extinct in Great Britain and some other countries. They are rare over the rest of their range, including most of North America.

Opinions are changing, however. Many people now consider beavers beneficial. Their dams slow water flow. The lakes and marshes they create hold the water on the land. Cutting trees permits more trees and other plants to sprout and grow. They’re even live-trapped, then released in areas where there are none.

Now, in America, beavers are permitted to spread, as our new furry neighbors have.