Skip to content
A Look Back At Our Community In 2019 Featured Local News Spotlight The Great Outdoors
September 14, 2018January 19, 2019 Michael Morrissey 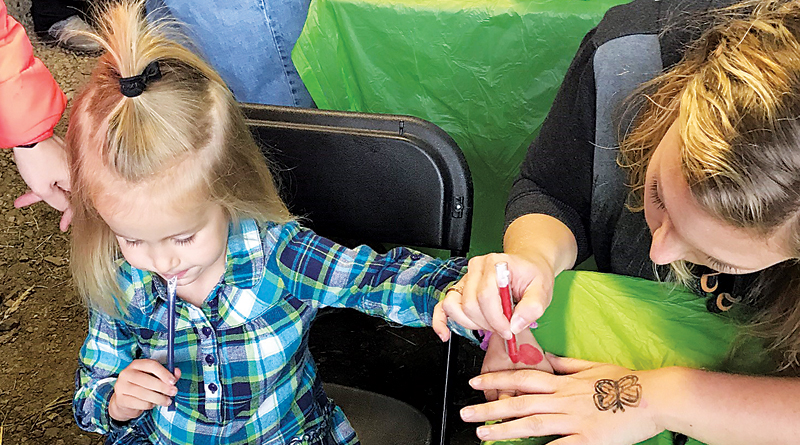 The four-year-old little girl was remarkably calm amidst the swirl of activity all around her as the annual Monarch Festival was held at Eagle Marsh on September 9.

Hosted by the Little River Wetlands Project (LRWP), and held inside the cavernous, red barn at Eagle Marsh – thanks to the day’s rainy, cloudy skies and cool temperatures — this year’s event attracted hundreds of folks hoping to find out a little bit more about the iconic butterfly, and perhaps even see some fluttering examples of its kind.

LRWP Chair, Betsy Yankowiak, said the fair typically attracts 1,000 to 1,500 people. On this cool, cloudy day, however, she was just hoping for more than 500 people to attend.

Dozens of tables were set up for visitors, each staffed by a different group presenting their information or selling their wares during the festival.

The Fort Wayne Children’s Zoo table offered a simulation of what pollen looks like when it sticks to a butterfly’s legs. Using pipe cleaners and corn meal and flour, kids could recreate the way pollen grips onto a butterfly’s extremities as it flits from flower to flower.

The Purdue Master Gardeners table offered free milkweed seed and milkweed seed bombs to help people grow the monarch’s favorite plant. “All we need to do is plant milkweed,” Yankowiak stressed. “If we do that; the monarchs WILL find it.”

At the honey table, the beekeeper was selling varying sizes of their honey in jars and smaller amounts in plastic straws filled with its sweet nectar.

The Little River Wetlands Project table was offering booklets and brochures, as well as hats, shirts and stuffed animals emblazoned with the LRWP logo.

One station even offered homemade guacamole, salsa and hot sauces for the hungry crowd to sample, as well.

And, of course, several other tables featured mesh cages filled with the beautiful adult orange and black-winged butterflies.

Unique in nature, monarchs are the only butterfly known to make a two-way migration, as most birds do. When the weather begins to turn cooler in the northern hemisphere, the butterflies begin to head south, with most eventually wintering in the mountains of Mexico. And because, according to Yankowiak, most monarchs don’t weigh much more than a dead leaf, the insects must use a combination of air currents and thermal drafts to make their journey.

Some travel all the way from Canada to Mexico, then back in the summer, a total of more than 3,000 miles.

Unfortunately, development has erased much of the land and the plants the monarchs need to survive, thrive, reproduce, and migrate.

“Since 1990, the monarch population has declined by 90%. The U.S. landscape has changed so drastically,” Yankowiak said. “A lot of the natural milkweed has been removed; and the little places that used to have the milkweed have disappeared.”

Yaro Carpenter, Koko’s mother who was keeping a close eye as her daughter got her hand painted by Camille Krouse near the barn’s rear entrance, said while it was she and her daughter’s first time at the annual event, they were happy they came.

“Every table has some kind of a great activity or something we wanted to buy,” Carpenter said. “It’s really been a lot of fun.”

A Look Back At Our Community In 2019, Featured Local News, Spotlight, The Great Outdoors