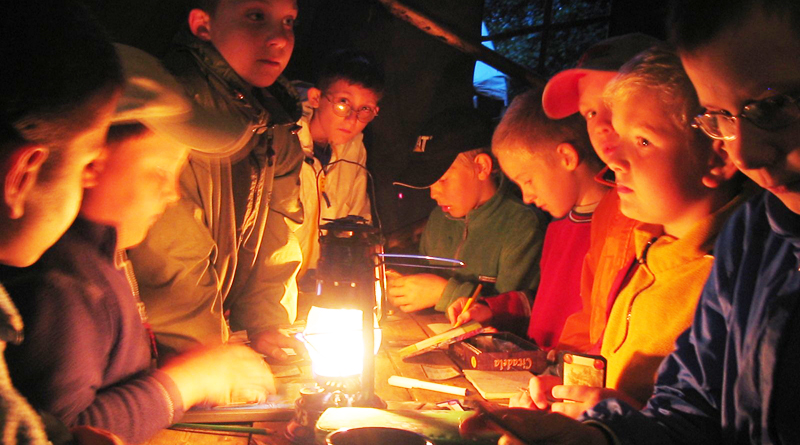 Scout camp was going pretty much as usual. Gordy had had an Oreo cookie stolen, and he was sure someone was taking his candy, too. He was determined to find a way to catch the bandit. That was when I suggested that he paint the candy wrappers with red paint acquired from the leather-working merit badge station. And that was exactly what he did just before he left the next morning to work on merit badges.

I was around camp most of the morning and saw nothing unusual, but, when everyone returned for lunch, Gordy’s painted candies were missing. He demanded everyone show him their hands, but the only person with any paint on himself was Gordy from his sloppy paint job. He couldn’t try this technique again since everyone now knew what he had done. But it didn’t matter to him, because, in his mind, everyone was guilty, and he wasn’t reluctant about saying so.

“That’s stupid,” he replied. “Just because you’re a math professor doesn’t mean you can solve something like this by logic.”

“No,” I said, “but sometimes the answers are different from what a person may think. And, often, they are right in front of a person’s face.”

“And if it is Gordy’s face,” Devin said, “then it could be a really ugly answer.”

“Ha, ha,” Gordy replied. “Thousands of comedians out of work and I get stuck with you.”

“Let’s consider some things,” I said. “Gordy, did you zip your tent shut when you left?”

“Was it still shut when you came back?”

“Almost,” he replied. “The zipper was up about four or five inches.”

“Was it the same way last time when you lost the Oreo?”

“If a thief wanted to remain unsuspected,” I said, “I’m sure that he would have tried to leave things exactly the same.”

“So why only leave it up four to five inches?” Tanner asked.

I thought about it for a minute as the whole troop stared at me, acting like I was going to get some kind of revelation or something. And then, suddenly, I did get one. I smiled as the answer began to come to me. “Maybe it was up only four or five inches because that was all the thief needed,” I said.

“That’s stupid,” Gordy said. “Obviously he couldn’t crawl in that hole. And I put the candy at the far back of the tent so he couldn’t reach his arm in and grab it.”

I smiled, and that seemed to build the suspense and curiosity for everyone. “Gordy, were there any other signs or anything?” I asked.
“Well, the thief dripped a little paint in the tent,” Gordy replied.

Everyone followed as I went to look at the evidence. Upon inspection, I shook my head. “That’s not dripped paint.”
“What is it?” Mort asked.

Instead of answering, I scanned the trees. The boys looked up, trying to see what I was looking for. Finally, I saw it. I smiled as I answered them. “It wasn’t dripped paint; it was footprints.”

I had seen a squirrel often watching us. But now, its paws and whole underbelly were red. I pointed at it. “There’s your thief.”

Gordy looked up and saw the red paint on the squirrel. He walked over to the tree, and sure enough, the ground was littered with candy wrappers. He shook his fist at it. “You dirty little thief!”

The squirrel shook his fist back and shouted “Chi, chi, chi!”

“You little beggar!” Gordy yelled. He picked up a stick and threw it up at the squirrel. The stick came right back and hit Gordy on his foot. He started jumping around and hollering.

And, thus, was solved the case of the scout camp bandit.

Daris Howard
Daris and his wife, Donna, have ten children and were foster parents for several years. He has also worked in scouting and cub scouts, at one time having 18 boys in his scout troop. His plays, musicals, and books build on the characters of those he has associated with, along with his many experiences.

Daris and his wife, Donna, have ten children and were foster parents for several years. He has also worked in scouting and cub scouts, at one time having 18 boys in his scout troop. His plays, musicals, and books build on the characters of those he has associated with, along with his many experiences. > Read Full Biography > More Articles Written By This Writer