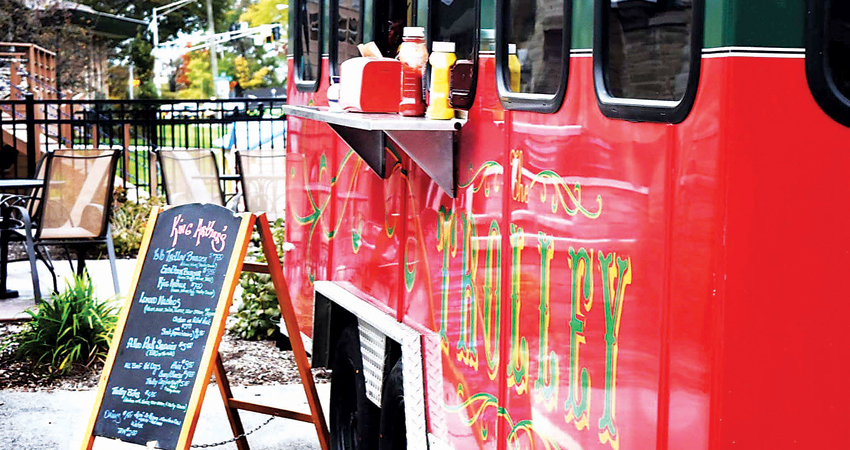 There’s a new face in the kitchen at the American Legion Post #241, and they’re serving up some delicious fare.

While the Post’s food service was once manned mostly by Legion members, it’s now operated by a company called King Arthur’s Trolley, and more specifically, by chief cook Carlton Arthur.

Though he just began at the Post last November, Arthur comes to the job with years of experience, working as a cook at the Main Street Bistro downtown, as a chef at the Tippecanoe Country Club, and as a chef at both the Oakwood Inn in Syracuse and at Maple Leaf Farms, he said.

His new menu at the Legion now offers everything from Cobb salads ($8); grilled or breaded pork tenderloins with fries ($7); breaded chicken fingers with fries ($6); to 14” pizzas ($7 to $9, depending on the toppings); and various burgers, all the way up to the towering King Arthur Burger, which sports cheddar cheese, bacon strips, an onion ring, BBQ sauce, chipotle mayo and a fried egg on top. Sides offered include fries ($3), onion rings ($4), fried mozzarella ($4), and side salads ($3).

Arthur says he takes pride in making sure all of his ingredients are fresh. For instance, the pork tenderloins and chicken fingers are all hand-cut and hand-breaded. Steaks are all hand-cut, and the kitchen’s salads are all hand-shredded. Burgers are crafted from 100% Didier Meats.

And while the Post used to have its menus planned out at least a month in advance, Arthur is varying the menu on a day-to-day basis. “I’m not a chain restaurant,” he said. “I don’t do the monthly menus like before. I like to change it up.”

Arthur’s arrival at the Post was rather serendipitous, he explains. About two years ago, Arthur’s mother-in-law and father-in-law passed away. And during an auction of their belongings, a food truck pulled up, selling hamburgers and hot dogs. His wife suggested buying the truck to start his own business, and Arthur took the plunge.

At first, the food truck – which is actually a 1973 motor home decorated to look like a trolley – was just going to offer a variety of baked potatoes, he said. Now, the trolley offers a wide-varying menu, with its most popular items being burgers and the truck’s famous nachos, which are offered with either pulled pork, chicken, beef or steak. He also serves the monstrous “Three Rivers Burger,” containing 1/3 pound of beef, 1/3 pound of chicken-bacon-ranch, 1/3 pound of bratwurst, and topped with lettuce, tomato, onion, pickle, BBQ sauce, chipotle mayo, then finished with a fried egg on top.

Arthur also helps to run the concession stand and bistro at Spiece Fitness, 5310 Merchandise Drive. And the trolley makes regular visits around town, serving its munchies at a wide range of events. “I’ll do anything from births to funerals,” Arthur joked.

In fact, the truck was parked outside J.K. O’Donnell’s Irish Ale House downtown for last year’s St. Patrick’s Day celebration, according to Arthur.

This year, the Post and Arthur’s kitchen, at 7605 Bluffton Road, is even planning a Super Bowl party the day of the big game, February 4.

Arthur said taking over the Post’s kitchen has not only been a labor of love, but one that allows him to give back, as well.

“I’ll never be a millionaire doing this,” Arthur said, “but it’s something I enjoy and the military’s always been dear to my heart.”