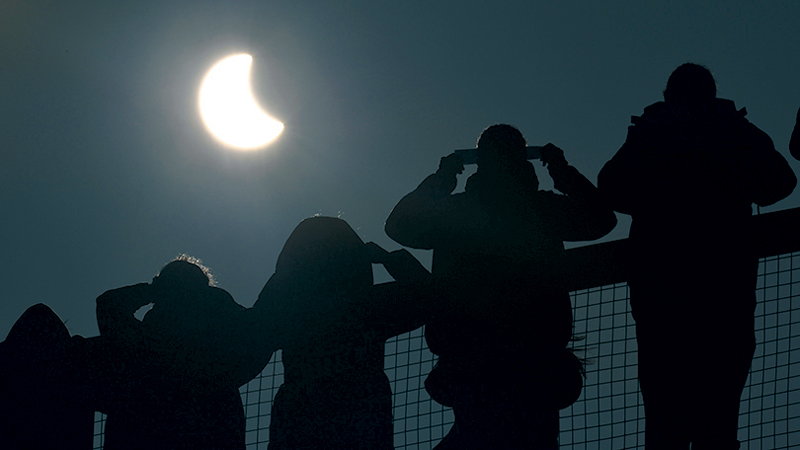 A local man is planning a field trip of sorts to witness an historic solar eclipse this summer.

Bob Dispenza, who has managed Metea County Park for the last 16 years, is organizing a bus journey that will motor local folks all the way to southern Illinois to witness the eclipses’ totality as it races across the continental United States.

“I’ve wanted to do this since the last eclipse in the Midwest in 1994,” Dispenza said. “And this program will give people who don’t know much about astronomy a chance to learn and see an once-in-a-lifetime event.”

Dispenza’s program really kicks off with a pre-trip program he’s planning at Metea, 8401 Union Chapel Road, on Saturday, August 19 at 10 a.m. There, trip participants will get a quick overview of the eclipse, what to look for during the event – other than the obvious moon blocking the sun – and how to use the equipment needed to watch the eclipse without damaging their eyes.

The eclipse will occur on Monday, August 21, and has been described as “The Great American Eclipse” by the scientific community. Scientists and astronomical observers are particularly excited about this event because it will be visible as a totality only within a band that stretches across the continental United States.

A total eclipse happens when the moon passes between the Earth and the Sun, totally or partially obscuring an Earth-bound viewer’s view of the Sun and its radiant light. It occurs when the Moon’s apparent diameter is larger than the Sun’s, blocking all direct sunlight from reaching the Earth, and essentially turning daytime into darkness.

“Totality” is only seen in a narrow path on the Earth’s surface, with a “partial” eclipse visible in areas near the totality, a swath of Earth thousands of kilometers wide.

The path for this eclipse, which will start about 10:15 a.m., Pacific Daylight Time, begins in Washington state, goes through Oregon, Nebraska, Missouri, southern Illinois, Tennessee, then South Carolina, and finally, out to the Atlantic Ocean.

Totality will last the longest – about 2 minutes, 41 seconds, at Giant City State Park, just south of Carbondale, Illinois. And that’s exactly where Dispenza’s group is heading on their trip.

This particular event is the 22nd one of the 77-members of the “Saros Series 145,” which also produced the eclipse of August 11, 1999. Eclipses in this series are getting longer and longer, according to scientists. The longest one in the series will happen on June 25, 2522, and will last 7 minutes and 12 seconds.

The last time a total solar eclipse was visible across the contiguous U.S. was almost 100 years ago — on June 8, 1918.

For this eclipse, Dispenza and about 31 people will board a charter bus at Fox Island County Park, 7324 Yohne Road, on the morning of August 21 and make the roughly 6-hour drive to Illinois for their viewing. Cost of the trip for each person is about $100, Dispenza said, which also includes solar filters for safe eclipse viewing.

He said the trip is really a once-in-a-lifetime joy because of everything his group will be able to witness.

“It’s just everything,” said Dispenza, who is originally from Youngstown, Ohio. “It’s seeing everything get completely dark, feeling it cool off, seeing the little crescents race across the ground, watching what the wildlife does as darkness falls. And, we’re bound to be surprised by things, too, because this is the first totality we’ve seen in a long time.”