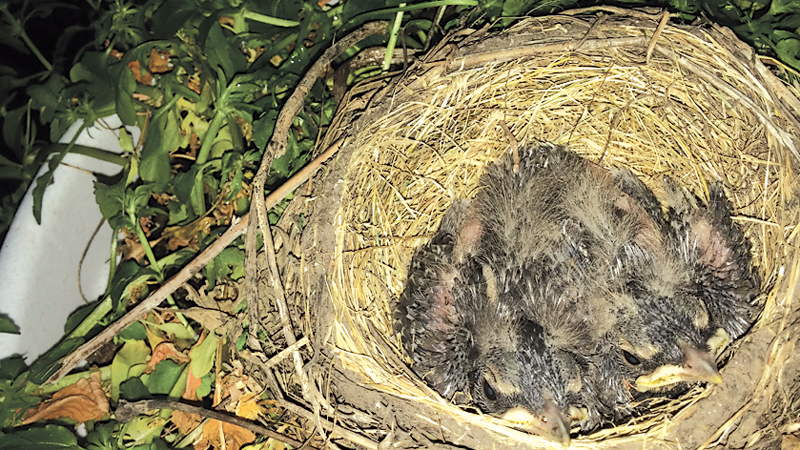 I was told recently of a pair of robins that built a nest on a home window sill, laid eggs, hatched a brood and are now feeding nestlings. I’ve seen young robins recently myself, black spots on their breasts, short tailed, fledglings, young out of the nest and on the ground. They were following and being fed by adult robins, their parents.

Robins aren’t the only birds with nests and young. Nor were they the first. Great horned owls began nesting months ago, in February or even January, when there was still snow on the ground and lakes and streams were still covered with ice.

I read of someone who climbed to an eagle’s nest and found an eagle on one side of the nest, a great horned owl on the other side. Both birds were on eggs, incubating. The account did not tell whether either eagle or owl hatched and raised their broods and I always assumed the climber did not return to the nest later so he did not find out if either the eagles or the owls hatched and raised their broods.

Many birds are nesting now. Many are incubating eggs and others already have nestlings. Three pairs of barn swallows have built nests in our barn this year. Two fastened their mud and grass nests to the sides of beams and one attached its nest to a light fixture. The eggs have hatched in all three nests and the nest owners are swooping in and out of the barn throughout the day, feeding the nestlings.

When I look out across our marsh during the day I see female red-winged blackbirds flying into the cattails with food in their bills, then flying out of the cattails minutes later with empty bills.

A pair of killdeers have a nest in our pasture I’m sure though I haven’t found it. But whenever I walk in a certain area two adult killdeer flutter across the ground before me, calling loudly, wings drooping as if injured and unable to fly.

A killdeer nest isn’t much, just a scrape in the ground. The eggs are completely exposed. But they’re still not easy to spot, especially with two adult killdeers putting on such a noisy display and attracting my attention.

I have a new bird house in a tree near my house this year, a big bird house. It’s the size specified for screech owls. And it’s occupied! But not by screech owls, by starlings. Starlings are not favorite birds of mine but I won’t evict them.

Bird nesting is in full swing, at its peak. And it will continue throughout the summer. The robins nesting on the window sill, the robins feeding fledglings in my yard will likely re-nest and raise second broods. Mourning doves have been reported to raise as many as five broods in a season. Goldfinches raise only one brood but don’t nest until thistles begin to go to seed, then use thistle down in their nests. Nesting is going on even as fall migration begins.