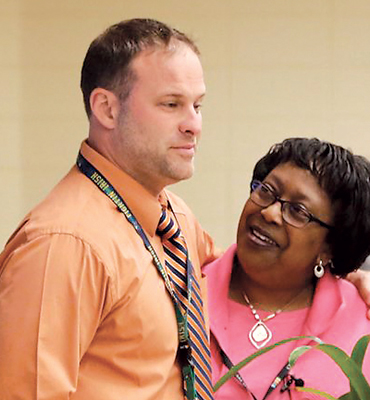 Roberts was selected as Teacher of the Year because of his passion for providing a rigorous education in an environment that helps students understand the relevance of what they are learning. He develops relationships with each student as individuals, serving as a mentor to many.

“Relevance and rigor can never be truly developed and nurtured without relationship building,” Roberts said. “My students can be challenged and pushed because each student can trust that I am doing my personal best to get their personal best every day.”

Roberts has worked not only to bring the community into the classroom, which is a key component of the New Tech philosophy, but also to take his students out into the community. He has done this by asking students to present their downtown improvement projects to city leaders and partnering with the Fort Wayne Jewish Federation to teach about the Holocaust through projects centered on Yom Hoshoah, Holocaust Remembrance Day.

“These projects allow the students to be on display and allows them to feel self-worth,” he said.

Roberts comes from a family of educators. His mother Barbara Roberts is a Title I District Coach working with pre-K programs; his brother, Todd Roberts, is also a teacher at New Tech Academy; and his brother, Chris Roberts, is a construction trades instructor at the FWCS Career Academy at Anthis.

Superintendent Dr. Wendy Robinson said Roberts’ passion for educating all students exemplifies what it means to be a teacher in Fort Wayne Community Schools.

“Jeff is a valuable member not only of the New Tech team and Wayne family but of the district as a whole,” Dr. Robinson said. “He doesn’t look at his students as just students; he treats them as he would his own children, which means he holds them to high standards but also is compassionate when he knows they are struggling with issues inside or outside the school building. He is creating leaders who are ready for college or careers after graduation by teaching them the skills they need to be problem-solvers.”

Roberts will also be nominated for Indiana Teacher of the Year.