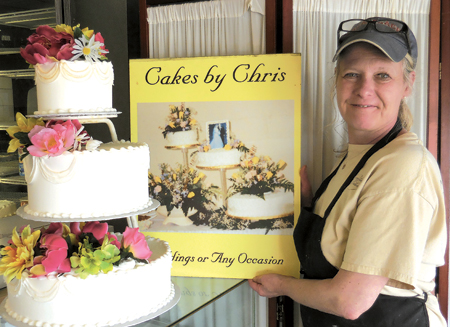 Contrary to popular belief you can have your cake and eat it too! A staple in the community for 61 years, Waynedale Bakery has the most longevity of any bakery in Fort Wayne. Their focus of serving a good quality product at reasonable prices has withstood the test of time. At any given time, you can expect to find a variety of homemade baked goods.

Currently owned and operated by Chris Miller, the bakery has a rich history. Waynedale Bakery was founded in 1955 by Kyle Mason. Kyle had been a baker in the military and pursued that talent in his civilian life until his retirement in 1992. He was followed by another experienced baker, Richard Gruwell who sold the bakery in 1999 to Bonnie Harris. And finally in February of 2002 the bakery was purchased by the Miller/Clinger families.

Chris Miller moved to Fort Wayne in 1984 when her dad Hal Clinger took a job at Coverall on Brooklyn Avenue. They temporarily lived at Pine Haven motel until finding permanent residence on Rudisill. As a family they frequented many community restaurants including Mister Coney and Al’s Family Restaurant. She graduated from Bishop Luers in 1985. After pursing a commercial art degree at IPFW for over a year, Chris decided that decorating cakes at Scott’s on Decatur Road “was a lot more fun!” She worked there for seven years until the birth of her first child, even winning an award for her decorating efforts at the Three Rivers Festival. In 1989 Chris became a cake decorating instructor and retail merchandiser for Wilton Method. She didn’t care for the paperwork, much preferring the creative side. So she took a job at “Hall’s Takes the Cake” where she stayed for the next 12 years.

Chris and Kevin, her husband of 23 years are proud of their four children; Ashley, Haley, Jeremy and Jason. They have been active members at St. John the Baptist Catholic Church for 32 years. They enjoy spending time with friends and seeing local bands. Chris’s hobbies also include radio games and painting.

Waynedale Bakery has supported all eight years of the Kingston’s Taste of Waynedale as well as the annual Waynedale Picnic. They continue to donate to fundraisers at local legions as well.

In addition to a variety of donuts, cookies and muffins, Waynedale Bakery also offers 6” Best Wishes cakes on a daily basis, with pies generally made to order. They do seasonal items such as Paczkis for Fat Tuesday and Pineapple Upside Down cake for Easter. Every Friday they have Challah bread available. Cakes are big business especially during wedding and graduation season. Goals for the business include acquiring more restaurant accounts and more cookie venues. They currently bake fresh hot chocolate chip cookies to sell at local show choir invitationals.

Waynedale Bakery will continue to make memories special in the Waynedale community. Maybe you can’t buy happiness but you can buy cake and that’s kind of the same thing.