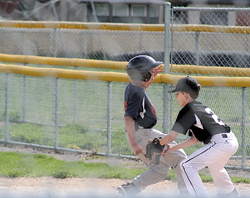 It was a beautiful day for baseball, as Game Day Sports took to the field against a team called The Deck. The game started at 10am on Saturday, May 4, 2013 down at Foster Park’s Little League Diamond #2. The field was a bright green with a deep blue sky above.

At the end of the second inning it was a tie game, with the score 2-2.

Out on the mound in the fourth inning was Game Day Sports’ pitcher #6 Jaden. He winds, he throws…batter #8 from The Deck hits a triple putting the score 3-2 with The Deck on top.

You could hear coaches encouraging players, “When you swing that bat, mean it!” “Don’t stop! Run!”
“We’re still in this guys!” “Be ready down there.” “Get him when he goes.”

Coaching a youth baseball team can be a rewarding experience for a parent. Yet it can be nerve-wracking. “I’m more nervous coaching, than I ever was playing ball,” said Scott Dantzer, the coach for Game Day Sports team.

This is nothing new for this Game Day Sports coach.
The last time The Waynedale News covered a baseball story with Scott he was coaching a team called Ron Dantzer’s 24/7 an Elmhurst Little League team that accomplished an amazing 24-0 season. The age span for Elmhurst Little League at that time was from 8-12 years, and the ages of the kids on 24-7’s team were mostly between 8 and 10.

Scott said he also coached Concordia High School for 3 years and a travel team called the Fort Wayne Flyers. Most of his coaching techniques, he said he learned from Lance Herschberger.

Scott’s son Carson plays first base for Game Day Sports. Coaching, much like parenting can be a very rewarding endeavor.

After the game I also talked with The Deck’s coach Scott Dinius, an Elmhurst grad from 1970. His father, Bill, aka Billy Martin, he said they call him, is in his 20th year of coaching with his son by his side. He went on kidding, “I’m more of a Bobby Knight-style of coach than Billy Martin.”

In the last inning, the field was a bit greener and the sky a deeper blue for Game Day Sports players, as they came from behind to win the game.