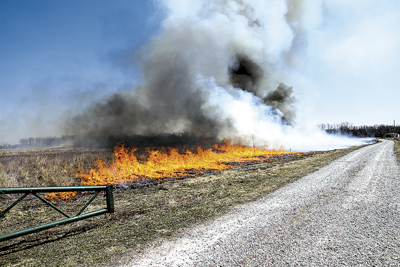 Last weekend you may have looked up at the sky and noticed a massive cloud of smoke. And, as you traveled down Engle Road, there was this huge fire! It was a controlled or prescribed burn. It’s like a process in which humans mimic nature. Fire is a natural and essential ingredient of healthy native ecosystems. Lightening strikes a spark and a natural fire occurs performing a “spring cleaning” of sorts.

The burn was a natural process of succession, selection and nutrient cycling according to Heartland. And will be performed about every 3-4 years. This was the optimal time of year-early spring-to burn. A burn of this type needs to be done before the grasses and forbs come out of dormancy.

“Don’t worry,” said Betsy Yankowiak, Director of LRWP, “there were very little casualties with the mammals. Birds flew to safety ie., wood ducks, kingfishers and red-tailed hawks, frogs are somewhat dormant and deer and coyote headed to the woods. The skunks were even seen crossing the road.

My only concern was with the snakes. We noticed a few blue razor and black rat snakes that may not have had time to escape to unburned areas.”

Hiding in the water were beaver and muskrats. The mature bald eagle pair was safe. They were hanging around Eagle Marsh and building a nest in a large old tree on private land near the preserve.

With the properly controlled burn, as this one was, and an experienced crew, the major burn took less than an hour. With an intentionally set fire, it cannot be scheduled in advance, as safety depends on factors such as weather conditions and staff availability to monitor each burn.

Jumping off the 4-wheeler Kawasaki Mule, the Restoration specialist reported, “The entire area was pretty wet. Cattails were iffy and there was no duff left.”

Special plants thrive in wet/marshy areas. More than sedges. Bulrushes and cattails are common. There are native cattails and invasive ones—fortunately, these experts know the difference and are trying to keep the bad kind under control.

This ecological restorative burn returns carbon and nutrients to the soil while the heat and smoke stimulate seed germination. Additional benefits include: an enhanced aesthetic value, controlling disease and improving grazing conditions.

According to LRWP’s website they acquired Eagle Marsh (then 676 acres) in 2005 and, after extensive planning, began one of the largest wetland restorations ever undertaken in Indiana. Shallow areas were dug deeper, drain tiles broken, and pumps removed to hold more water on the land, approximating its original hydrology. Over 500 acres were seeded with native rushes, grasses, and wildflowers and approximately 45,000 native trees and shrubs planted. The initial restoration was completed in 2009. Intensive stewardship care is needed for at least five years to protect the new native plants from being overtaken by invasive species such as reed canary grass and phragmites.

To try to restore this important habitat, LRWP has planted a variety of native grasses, including big and little bluestem, switchgrass, and Indian grass. They’ve also planted wonderful wildflowers already growing in many areas. Watch for five different kinds of asters, four different sunflowers, common and swamp milkweed, Joe Pye weed, and the lovely wild bergamot (monarda) among others. The prairie grasses and wildflowers are not only beautiful, they also provide food and cover for all sorts of birds, small mammals, and insects such as butterflies.

Betsy said looking out over the almost two square miles of habitat for birds and other wildlife, “It looks so desolate. But if it’s not cleaned up, it won’t serve its purpose. That’s the way nature moves.”

Join them as they celebrate the important conservation efforts of LRWP and other groups in our community at Earth Day Fort Wayne on Sunday, April 21, from 1 to 5 p.m. at Eagle Marsh.