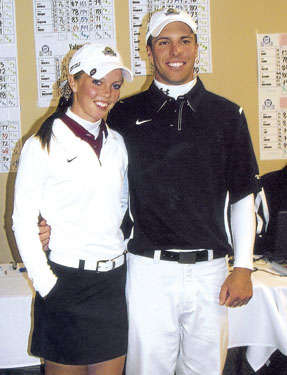 She has had enough of amateur tournaments playing for tin cups, bowls and TVs. Bishop Luers grad Kristi O’Brien is ready to step up to the next level. She has chosen to become a professional golfer and play for pay.

Good for her! She has the ambition to play professionally. Professional golf is one of the toughest careers. Kristi’s mind is made up. She’s mentally set to play and is on the road to a successful golfing career after completing her Event Management degree at IUPUI.

A few days ago, I got the chance to talk to her father, Tom O’Brien, the Bishop Luers golf coach. He mentioned that she has already discovered the vast difference in play from an amateur to a professional.

From IUPUI college golf, where Kristi broke a number of college records, the progression continued at the amateur level.

Last season, O’Brien posted rounds of 78, 74 and 75 in the North-South Amateur played at Pinehurst, NC. Overall, Kristi finished in the top 50 out of around 115 top women golfers. The confidence booster came she said, “When I found out that I finished the tournament ahead of a bunch of women who were ranked in the Top 100 Women Golfers in the world!” Her crowning achievement in Amateur Golf was when she won the Indiana State Amateur Championship. Her 3 day total of 8 under par (73-69-69) is believed to be a tournament record. Two months later, Kristi was named Indiana Amateur Golfer of the Year by the IGA.

Focus, fearlessness, and seriousness is the business of pro play. Just as in any professional sport – It’s a job. Not a vacation.

“Qualifying for pro status is the first step,” O’Brien said. They call it “Q-School.” Q stands for qualifying. This school guarantees the winner of the qualifying tournaments a LPGA card and the nationwide tour. The nationwide tour is like the minor leagues in baseball.

Colby Huffman has been coaching Kristi, working on skill development and influencing her performance to become a persistent player on courses which average over 6,500 yards in length. Colby was the 2011 Indiana Golf Teacher of the Year.

“She is a hard worker, with dedication and patience,” reported course pros. “Her work ethic is off the charts!” A day for this impressive, ambitious, 22-year-old consists of practicing for 5 hours, playing 18 holes for 4 hours, then back to the driving range for 15 minutes or until the sun goes down.

“That day I was shaking the first 12 holes!” Kristi hit it in the water on #1, which led to a double bogey. She had 5 three putts and 4 doubles to end that first Pro day for a score of 85. Day two, played for 16 holes at 2 over par but finished with a bogey on the long 17th hole Par 3, and then hitting into the water on 18. 3 putting for a triple bogey. At this point Kristi stood 30th out of a field of 42 golfers with only one round to go.

Kristi said it was hard to be negative. “I am so thankful to just have the opportunity to be able to play at this level.”

The final day proved to be different. Kristi stayed positive and focused, staying confident in herself and the game. She played 1 over par on the front nine, then 2 under par on the back. She birdied #10 and bogeyed #11, and proceeded to par the next 4 holes. Kristi birdied both #16 and #17 before parring the brutal finishing hole. With a score of 1 under par 71, it placed her at a tie for 18th out of 42 players, finishing with a 234 total score. Only Paula Creamer (65) and Simin Feng from China (70) shot lower in this final round. Paula went on to win this SunCoast Ladies Golf Tournament played at the Orange Tree Country Club in Orlando, Florida.

The top 13 lady golfers made the money list. Kristi finished 5 spots-5 strokes-away from cashing her first check as a professional golfer.

“It was a great learning experience for me,” commented Kristi. She realizes that there are no guarantees. The path that she has chosen is one of the toughest ways to earn your income. As Confusius says, “Choose a job you love, and you will never have to work a day in your life.”

Kristi puts into perspective that she will be living on the road, traveling for work. This week she is playing in Daytona Beach-National PGA and then it will be back with the SunCoast. Spring Season starts in March for Kristi where she hopes to qualify for the U.S. Open! You can follow Kristi on facebook as she works her way to the top.

By taking it one step at a time, and with hard work, determination and focus we just might be seeing Kristi O’Brien in an interview as a “Morning Drive” guest with Gary Williams and Holly Sonders on the Golf Channel. Stay tuned!