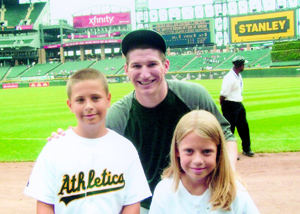 It was 2001 when my wife Barbara and I became interested “fans in the stands” watching Justin and Jarrod Parker play baseball. And now, our two grandchildren, Cody-11 and Taylor-9, are taking an interest in the “Parker brothers” because they live in Ossian and will be attending Norwell High School in the future. The grandkids would ask, “When can we go watch “the boys” play?” Cody and Taylor have joined us on several occasions especially when Justin was playing for the South Bend Silverhawks and when Jarrod played for Norwell and then later the Silverhawks.

The most memorable moment was just recently when we all headed over to watch the Oakland Athletics play the Chicago White Sox. Jarrod was scheduled to pitch that day, but at the last moment the Oakland coach gave him an extra day of rest. It was the best thing that could’ve ever happened, especially in Cody and Taylor’s eyes, because Jarrod was able to spend more time with his family and friends.

Sporting their Oakland Athletics’ jerseys and a big sign that said, “Go Jarrod Parker #11!” the grandkids were able to meet their idol…Jarrod Parker. Jarrod was great with the kids. He signed their jerseys, baseballs and gloves. How often does a young child get to meet up with their “real” life idol? And he lived up to their expectations! The grandkids were overwhelmed with happiness in talking and seeing Jarrod.
––––––––––––––––––––

In 2001 Justin was a freshman at Wayne High School where I taught. He was not only a student in my drafting class for 4 years, but also played baseball. Before and after class we would talk sports. He asked us if we would like to attend some of his baseball games. Throughout the season, Justin introduced my wife and me to his father Brent, mother Ranelle, brother Jarrod and his grandparents. We became loyal fans.

Justin lettered in baseball all 4 years for the Wayne Generals. He was named to the All-SAC team as a junior and senior, selected to the All-Northeast Indiana as a junior, and named to the Division 3A All-State team his senior year. He hit .498 with 6 homeruns and 22 stolen bases. Justin holds the Wayne High School record for batting average in a season and led the team to a Sectional Championship. He also lettered in basketball and football, two years. He was All-SAC and All-State honors quarterback his senior year. Justin excelled not only in sports but also in scholastics—Justin was in the top 10 of his graduating class of 2005.

Even though he was drafted by the Minnesota Twins in the 43rd round of the 2005 Major League draft, Justin decided to enroll for college at Wright State University. He played baseball on a scholarship for three years. Playing shortstop and third base he carried a .359 average, hit 17 homeruns, 197 hits and 121 RBI. Barbara and I continued to support Justin attending doubleheader games at Ball State, Butler and Valparaiso universities. In 2006 he was named to the Horizon League All-Newcomer Team. And in 2007 to the First Team All-Horizon League and Rawlings Second Team All-Region honors from the American Baseball Coaches Association. In addition, to the All-Academic Team, he was selected to the Fall and Spring Academic All-League Honor Roll and named the Horizon League U.S. Army Scholar Athlete of the Week 3 times. In 2008, he was selected First Team All-Horizon League Shortstop and to CoSIDA/ESPN the Magazine Academic All-District and the Brooks Wallace Award Preseason Watch list.

Justin went on to become drafted once again, in 2008, this time in the sixth Round Draft Pick of the Arizona Diamondbacks- Major League First Year Player Draft. The Arizona organization sent him to the minor leagues playing for the Yakima Bears-Northwest League. Playing in the Midwest League for the South Bend Silverhawks-affiliate of the Diamondbacks-Justin was up against the Fort Wayne TinCaps. He batted .252 with 45 RBI. My wife and I and the grandkids followed Justin as he played in Fort Wayne, South Bend and Dayton. In 2010 he played for the Arizona League Brewers in the Arizona League- the Rookie affiliate of the Milwaukee Brewers.

Along with his parents, Justin decided to end his career as a professional baseball player. For the past two years he was on the Dean’s list finishing his degree from Wright University. Justin is currently a graduate and now the assistant baseball coach at Wright State.
___________________

2003 Jarrod Parker enrolled at Wayne High School as a freshman. He played second base as a freshman and sophomore, and occasionally a utility player with his brother, Justin, who was then a senior.

Even though he was named ALL-SAC as a second baseman, it was in 2005 that Jarrod decided to make the transition to pitcher.

In the summer of 2005, before Jarrod’s junior year in high school, Jarrod developed many friendships with Norwell area players on a traveling team. The Parker’s made the decision to move to Bluffton where Jarrod attended Norwell High School.

By the time Jarrod’s junior baseball season began in 2006, he had matured-stronger and faster. Coming off a growth spurt the previous summer, coupled with refining his pitching mechanics, dedication in the weight and conditioning room, and of course natural talent, Jarrod was primed to begin his dominant high school career as a pitcher.

The only loss his junior season was in a 6-2 decision to the eventual Class 4A State Champion, Snider.

Norwell dominated Class 3A, going 29-1, and making it to the State Championship games in Indianapolis. Jarrod, 8-1 with a 0.76 earned run average, started against Jasper. Statistically, that game was his worst outing of the season. At Victory Field, my wife and I watched Jarrod pitch 3 2/3 innings, allowing 6 runs on 7 hits. Jasper won the contest 13-12.

September 2006, Jarrod was one of 18 high school players selected to the United States Junior National Team that played in the World Championships in Cuba. He started one game and appeared as a reliever in 2 others. He was 1-0 with a 0.77 ERA in 11 2/3 innings pitched and allowed 6 hits, 2 runs and struck out 10 batters. The U.S. finished second, silver went to Korea. Also, he pitched in the East Coast Professional Showcase and Area Code games in California showcasing some of the country’s best high school players. Uncertain of a professional future in baseball, Jarrod signed in November 2006 to play his college career at Georgia Tech.

There were dozens of MLB scouts attending every game he pitched. The Diamondbacks never missed a start! The incessant attention didn’t bother Jarrod a bit. They even had speed clocks on him during warmups before the game. Jarrod and his teammates won the Sectional, Regional, Semi-State and State Championship. Jarrod was 12-0 with 2 saves, 0.10 ERA, 11 walks and 116 strikeouts in 7 innings. He also hit .481, 52 RBI, 43 runs and 9 homeruns leading Norwell to 35-0 record. They were the third undefeated high school team to make Indiana high school state baseball history.

To be continued in the next issue of The Waynedale News!