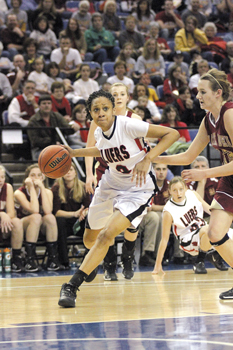 The 2010 – 2011 season was magical for the Lady Knights. Winning the schools 6th State championship in girls basketball was quite an accomplishment. Returning 3 out of their 5 starters, Head Coach Denny Renier and the 2011 – 2012 Lady Knights had one simple goal: Repeat—something the Knights haven’t done in nearly a decade.

The regular season involved a few “road bumps” but the Knights finished the season strong winning 7 out of their last 8 and their final record stood at 21 – 5 heading into state play.

As they have in the past few years the Lady Knights won sectionals and the regional, then finally defeated a tough Seeger team at Semi-state to reach the State Championship for the third consecutive year! In their way stood a familiar opponent to Bishop Luers athletics, the Wildcats of Evansville Mater Dei. The Lady Wildcats were playing in their first State Championship game.

At 26-1, Evansville Mater Dei was ranked number 1 in 2A and the Lady Knights number 2. As the game tipped and progressed it was obvious that these were two very evenly matched teams as their respective ranking reflected. The Wildcats led most of the game however the lead never reached more than a handful of points. Mater Dei led 15-14 after the first quarter, 28-25 at halftime and 41-37 after the third quarter. It could’ve been anyone’s game.

As the fourth quarter began the Lady Knights showed everyone why they were defending champions. Coming up with multiple defensive stops late and converting in key offensive situations, they made a run. During this run they outscored Mater Dei 12-8 to keep the game tied late. Mater Dei and Luers both had chances to win late but both teams’ defenses stifled one another and the game ended up going to overtime. This was just the eighth time in Indiana girls basketball history, the state championship game was decided in overtime.

The overtime session was as tight as the previous four quarters. With just under a minute the game was at 52. The Wildcats had the final possession with a little over 16 seconds left. They smartly ran the clock down to the final seconds where Maura Muensterman took a jump shot from the right elbow and hit the game winning shot with two tenths of a second left! Luers then proceeded to call a timeout, which they did not have and Mater Dei sank two more free throws to end the game. The final score was Evansville Mater Dei 56, Bishop Luers 52.

Although the Knights didn’t capture a championship this year, this doesn’t take away all that these girls have accomplished the last three years. To make it to a state championship game one year, you have to have a very good team, to make it three years in a row, you have a great team.
Congratulations Knights, hold your heads high!