It is important to know that most all plants, including those that like full sun are still happier with afternoon shade. Last summer, with the extreme heat was a great example of what can go wrong with nature. The heat here in Indiana was unbearable and we need to plant accordingly. If the weather guys (and gals) are correct, this year is supposed to be a cooler summer but always be ready for those surprising times when it simply gets hot.

Consider other states that always have hot weather such as New Mexico, Nevada and Arizona. Some of their favorite summer plants include portulaca (moss rose or purslane), lantana or vinca (sometimes known as periwinkle). These plants can really take the heat! But surprisingly, the common wax begonia can also take the heat and sun even though many of you think that begonias are for shade. Let me emphasize that it’s only the “wax” begonia that takes that much abuse, not Rex begonias nor tuberous (non-stop) begonias or my favorite, dragon-wing begonias.

I have even grown regular impatiens in total full sun all day long just to prove that it can be done. The only warning with that experiment is that when the impatiens start to wilt, you must water them immediately. Watering is the key to success with all plants, not so much fertilizer. Watering late morning or early afternoon seems to be the best time as this is when the plants are just beginning to show signs of stress and at that time of day, the watering will last until tomorrow. If you are an early morning waterer, then you must know that by the time you get home from work, your plants are wilting.

Earlier I mentioned vinca as a great sun-tolerant plant. The vinca plant used to come in only a few colors like purple, white or white with a red center. Now vinca comes in many colors and looks a lot like impatiens but with some interesting differences. One, it tolerates extreme heat without the worry of watering. Two, it likes to be grown in dry conditions which means that you may only have to water the vinca flower bed every two to four days, or even less and three (I’ll make this an advantage), vinca grows slowly. This means that unlike other fast growing flowers, your vinca will not out-grow the area early like the other, fast growing plants do. In fact, vinca may last and look great right up until the first frost. 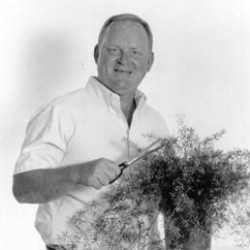 Doug's is the former owner of Broadview Florist & Greenhouses in Waynedale. He authors a garden & landscaping article in the newspaper. In his adolescence he attendedHillcrest, Kekionga and Elmhurst HS. His expertise has been shared in print, tv and radio.